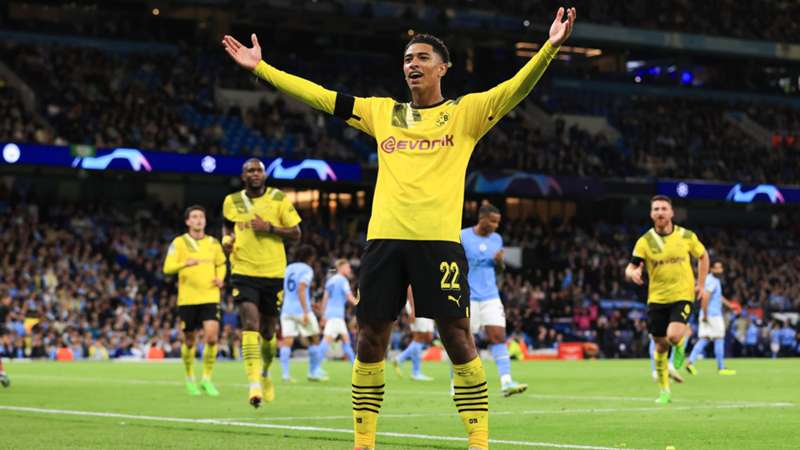 But John Stones' long-range strike beat Alexander Meyer in bizarre fashion with 10 minutes left, and Erling Haaland had the last word against his former club when he produced a terrific acrobatic winner.

Speaking after seeing his City team maintain their perfect start to the Champions League campaign, Guardiola singled out Dortmund's teenage midfielder for praise.

"He's able to follow [Ilkay] Gundogan, Kevin [De Bruyne], win the duels, transitions are fast, to have the sense in the box for the goal he scored.

Not quite enough tonight but proud of every single one of my teammates for the fight. Borussen, Thank you for your unbelievable away support. Full focus on the derby. #HEJABVB pic.twitter.com/D0hrGp6Dac

Bellingham has now scored four Champions League goals – the most ever managed by an English teenager in the competition. Meanwhile, his 18 appearances in Europe's premier club competition is a record among English players under the age of 20.

Half of the midfielder's Champions League goals have now come against City, after he opened the scoring in the second leg of the club's quarter-final defeat to Guardiola's men in 2020-21.

Dortmund coach Edin Terzic was also keen to highlight the quality of his performance, saying: "Jude, like all the other players, gave a great performance in offensive and defensive terms.

"He blocked so any passes and crosses and also got forward… once again, he was very good against Manchester City."