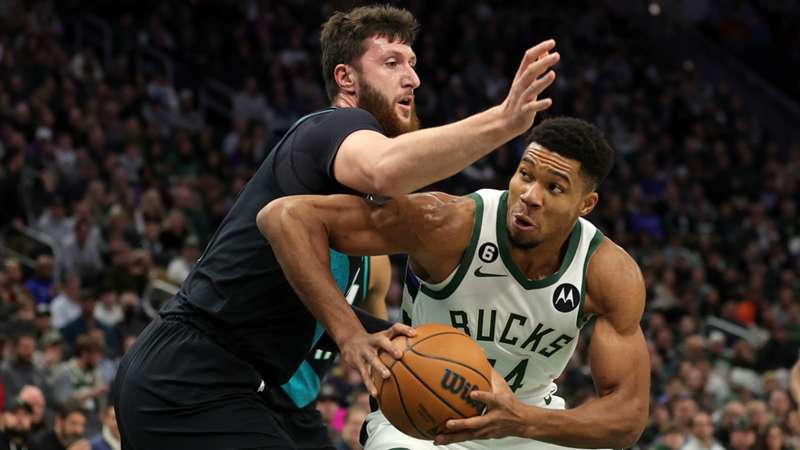 The Milwaukee Bucks own the second-best record in the NBA after their 119-111 home win against the Portland Trail Blazers on Monday gave them 12 wins from their first 16 games.

On the back of a big game from Anfernee Simons, scoring 29 points on 12-of-23 shooting, Portland trailed by only two at halftime – before Giannis Antetokounmpo took over.

The former Defensive Player of the Year and two-time league MVP controlled the third quarter at both ends, helping to hold the Blazers to 18 points, while scoring 19 himself on his way to a game-high 37 on 16-of-24 shooting.

While Antetokounmpo is once again a Defensive Player of the Year candidate – having made four consecutive All-Defensive First Teams – perhaps his biggest competition is his own teammate, Brook Lopez.

In his 15th season, the seven-foot Lopez is averaging a career-high and league-leading 2.6 blocks per game, and he improved upon that figure with five blocks and a steal against Portland.

Having played in 15 games this season, it is the fourth time he has tallied at least five blocks, and the Bucks are undefeated in those contests.

Milwaukee have made Fiserv Forum a fortress this season, now 9-1 at home and 3-3 on the road.

Jalen Brunson continues to make a case as the most impactful free agent signing from the offseason, scoring a season-high 34 points in a 129-119 victory against the Oklahoma City Thunder.

After leaving the Dallas Mavericks, Brunson is averaging career-highs in points per game (20.0), assists (6.5), steals (1.2) and minutes (32.5). His 34 points against the Thunder tied his most ever in a regular season game, although he had 41 in a playoff win against the Utah Jazz in April.

He shot 14-of-20 from the field, and in an encouraging sign, backcourt partner R.J. Barrett also had an efficient outing, scoring 25 on 10-of-16 shooting.

Fourth in the NBA in scoring at 31.1 points per game, Oklahoma City's Shai Gilgeous-Alexander had another 30 on nine-of-22 shooting, adding seven assists and five rebounds.

The Boston Celtics had their winning streak cut short one game shy of double-figures, going down 121-107 to the Chicago Bulls.

Chicago's shooting was the story of the game, hitting 14-of-29 three-pointers (48.3 per cent), including their starters combining to shoot 11-of-19.

Traditionally a mid-range scorer, DeMar DeRozan led the Bulls with 28 points on 11-of-24 shooting, hitting all three of his long-range attempts, while Zach Lavine was five-of-10 on three-pointers for his 22 points.