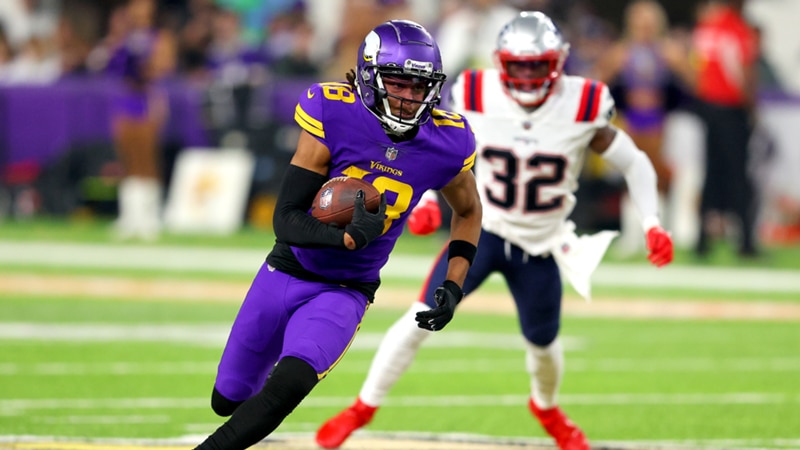 Justin Jefferson made NFL history as the NFC North-leading Minnesota Vikings claimed a hard-fought 33-26 bounce-back win over the New England Patriots on Thursday.

In a thrilling Thanksgiving game full of lead changes at US Bank Stadium, Minnesota scored the final 10 points to improve to 9-2, with Jefferson's contested catch for a 36-yard gain leading to Adam Thielen's game-winning TD from Kirk Cousins' 15-yard pass with 9:34 remaining.

Mac Jones was sacked by Ross Blacklock on a final-minute drive, before the clock elapsed with no timeouts remaining despite regaining 40 yards on passes for Kendrick Bourne and Jakobi Meyers.

Kirk Cousins threw three touchdowns with one interception for 299 yards on 30-of-37 passing for the game, while Kene Nwangwu provided a major highlight with his third-career kick return for a TD to tie the game at 23-23 in the third quarter.

Henry thought he had a second TD late in the third quarter, but the Jones' pass was ruled incomplete with the catch not controlled on landing, meaning the Pats had to settle for a field goal and a 26-23 lead, before the Vikings final-quarter rally.

Vikings receivers Jefferson, Thielen and T.J. Hockenson all scored TDs as they responded to Sunday's 40-3 loss to the Dallas Cowboys. Hockenson has the most catches by a tight end (26) in their first four games for a team in NFL history, having joined the Vikings from the Detroit Lions earlier this month.

With that 37-yard reception, WR @JJettas2 (4,186) set a new NFL record for most receiving yards through a players first three seasons. He passes the previous record of 4,163 yards set by Randy Moss. pic.twitter.com/jg3aLGx0Fy