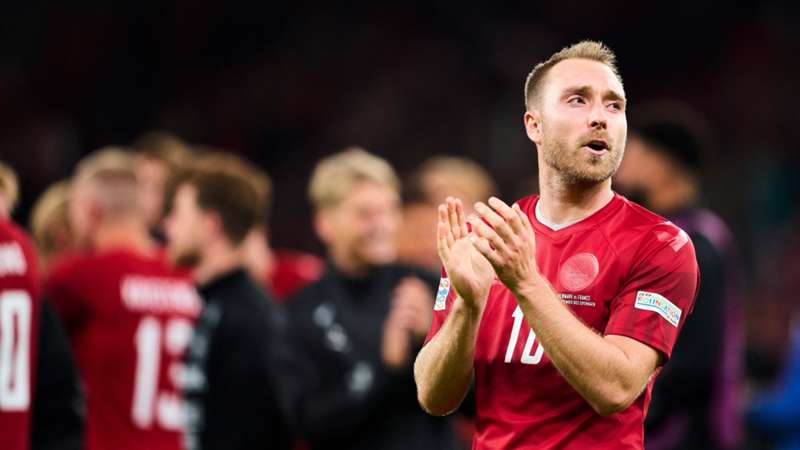 Christian Eriksen says Denmark captain Simon Kjaer will defy FIFA and wear a OneLove armband at the World Cup regardless of the consequences.

On Saturday, FIFA announced its own armbands will feature a different social campaign, including 'Save the Planet' and 'Bring the Moves', throughout each round of the tournament in the Middle East.

Eriksen confirmed Denmark will stick with the OneLove initiative as Kasper Hjulmand's side prepare for Tuesday's Group D opener against Tunisia.

"I think we as a country are wearing it, our captain will be wearing the OneLove armband and then what the consequences will be, I don't know but we'll see," said midfielder Eriksen.

"And apart from that, we are here as footballers and we are going to play football. Of course, we want to help what we can, but in the end I'm on this stage because I play football.

"That's really my focus, and it's our focus at this tournament."

"I'm just happy to be back. Especially to be at the World Cup. I've been lucky to play in one or two before, but it's special," Eriksen said.

"It's a big tournament, it's very difficult to qualify. We are dreaming of something big, but in the end, we have to get there.

"In football terms, we'll take one game at a time, and we will see where we end up."

Hjulmand's side will aim to escape Group D, which also includes world champions France and Australia, though Eriksen acknowledged it will be a difficult challenge.

"We know it's a tough group. Some teams we played a lot and some teams like Tunisia, we haven't played before," he said.

"It's a World Cup, so it's fun to test ourselves against teams we haven't played before."

Denmark have beaten France twice already this year in the Nations League, and Eriksen said he did not know whether that would influence the upcoming encounter.

"Normally, France in a tournament is a different team compared to the rest of the year," he said. "We know what to do, and we look forward to it."

Cristiano Ronaldo's scathing interview on Manchester United, in which he criticised the club, senior figures and manager Erik ten Hag, remains a significant talking point in the build-up to the World Cup.

Portugal captain Ronaldo said he felt "betrayed" by United, claiming the Red Devils have made "zero progress" since Alex Ferguson departed as manager in 2013, though Eriksen showed little interest in his club-mate's comments.

He said: "No, it hasn't been any distraction for our focus on the World Cup or a personal focus. And no, I haven't spoken to him since at the club."