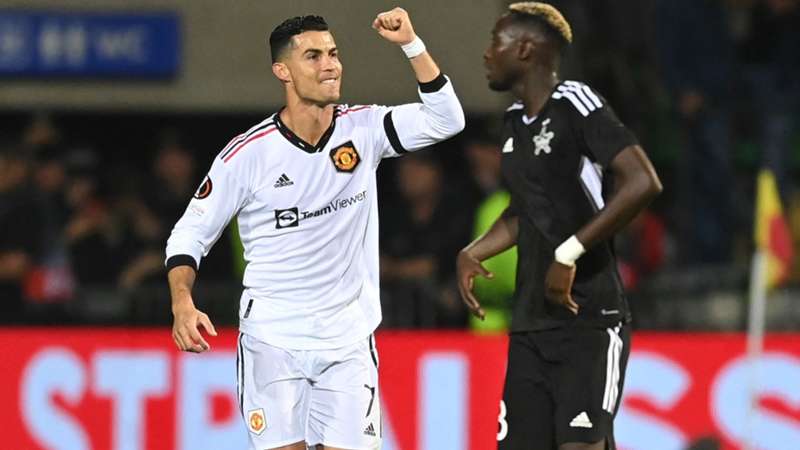 Erik ten Hag is confident Cristiano Ronaldo will score more goals after the forward opened his account for the season to help Manchester United shoot down Sheriff in the Europa League.

However, having started Thursday's game, Ronaldo was on target from the penalty spot as United got three points on the board in Group E.

It was the 699th club goal of Ronaldo's career, albeit his first in the Europa League, with Sheriff the 124th different side the 37-year-old has scored against, and Ten Hag is expecting plenty more to follow this season.

"He needed that goal," Ten Hag told United's club media. "He was close many times, but you always see he wanted that so much. We're happy for him, and the team wanted him to bring that goal.

"We could expect this when you miss pre-season, he has to work really hard and invest to get the right fitness. He will score more goals. He's really close; when he gets more fitness, he will score more."

124 - Tonight, Cristiano Ronaldo scored the 699th goal of his club career, with Sheriff Tiraspol the 124th side he’s netted against in all competitions - it was also the first time he has scored in the UEFA Europa League. Contribution. pic.twitter.com/NIEtdAR0PU

The United boss was also impressed by the performance of Jadon Sancho, who opened the scoring after 17 minutes when he turned on Christian Eriksen's pass and tucked a neat finish into the bottom-right corner.

Sancho, who was left out of Gareth Southgate's England squad earlier in the day, has now scored three goals in his last six appearances for United, as many as in his previous 24 games combined.

"I'm really pleased with [Sancho]," Ten Hag said. "[He scored] another goal, and he also scored many goals in pre-season.

"He's doing well, but I think there's much room for improvement for him because he has so many skills. So, bring it on the pitch and when he has that belief, I think he can be even more productive."

Meanwhile, Sancho underlined his determination to earn an England recall for the World Cup in Qatar later this year.

"It was really important that we got the win today," the winger told reporters. "Our last home against Real Sociedad was an upset and coming into this game, we knew we had to get the three points.

United have won five of their last six games in all competitions, as many victories as they had registered in their previous 21 matches combined.