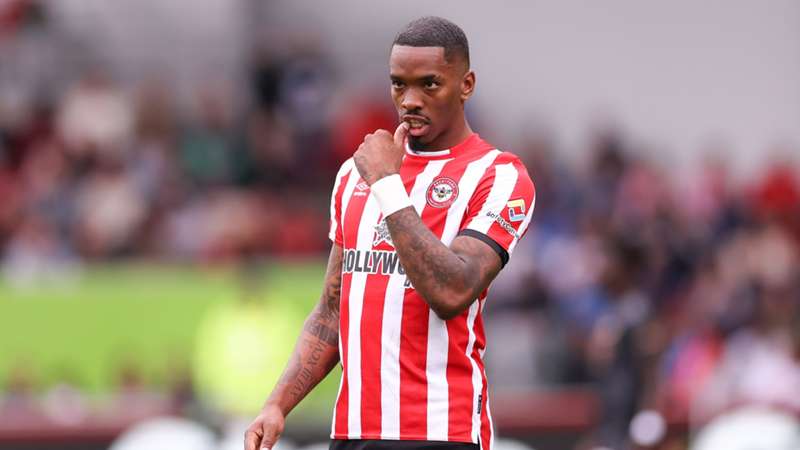 Ivan Toney says he was forced to bite his tongue in the wake of Gabriel Magalhaes' "cringey" social media taunt following Brentford's 3-0 defeat to Arsenal.

The win ensured revenge for the Gunners after they began the 2021-22 campaign with a demoralising defeat to the Bees, after which Toney tweeted: "Nice kick about with the boys."

Arsenal manager Mikel Arteta used that same message to motivate his squad ahead of February's reverse fixture – a 2-1 win for the Gunners – and it was repeated by Gabriel on social media following Sunday's win.

Asked about the jibe, Toney – who is away on international duty with England for the first time – said: "I think once was funny, the second time was a bit cringey, but I bit my tongue. I wanted to reply, and I wanted to nibble but fair play to them, they played very well.

"They're a much better side than what we played before and they are going very well, so fair play to them."

Nice kick about with the boys. @Arsenal

Toney, who is yet to be capped by the Three Lions at any age level, believes performing for one of the Premier League's less-fancied sides gives that honour extra importance.

"It makes it much more special," he added. "Nobody was called up from Brentford for like 70-plus years and I think if you are good enough, and you are doing your job as a striker, scoring goals and playing well, then why shouldn't you be called up?

"I think I have proved that. Everyone at the club is really proud for me and I can genuinely see that."

Only Erling Haaland (11), Harry Kane and Aleksandar Mitrovic (both six) have outscored Toney in the Premier League this season, but the striker is unsure whether he would replicate his exploits in a more established side.

"It's easy to say that I would be scoring goals, but I think that teams like them dominate possession a lot more, so I think in theory you are more likely to score goals as there is a lot more opportunities coming your way," he added.

"But listen, you still have to put it in the back of the net, so until I am there, who knows?

"Until then I am not sure, but they have quality players assisting them and hopefully one day I will be in their shoes and can be scoring goals like Haaland and Jesus."