Nagelsmann 'thinking about the situation, about myself, about everything' after Bayern lose at Augsburg 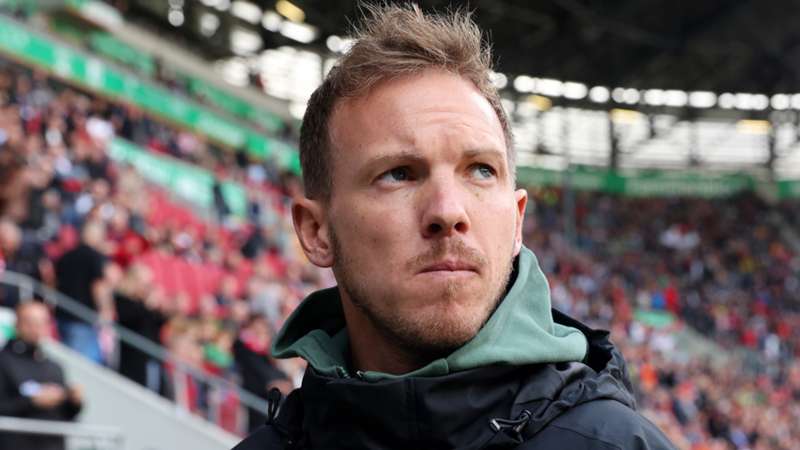 Bayern Munich head coach Julian Nagelsmann cut a frustrated figure after seeing his team lose at Augsburg, saying he must think about "everything".

However, it made it four games in the Bundesliga without a win for the defending champions, their longest period without tasting victory in the league since the 2001-02 season.

Speaking at a press conference alongside Augsburg boss Enrico Maassen after the game, Nagelsmann praised the victors, but believed his team should still have won the game.

"Congratulations to Augsburg and Enrico for their victory against us," he said. "If I look at the statistics I think we should win that game, if we properly defend that free-kick [that led to the goal].

"It was difficult to break them down after it went to 1-0."

Few visiting players shone on Saturday, and it was another struggle for Sadio Mane, who only had one shot at goal, fewer even than Bayern goalkeeper Manuel Neuer (two) who came up for late set-pieces.

"I won't be talking about individual players here, I will speak to them directly," Nagelsmann said. "There's always a difference between what I tell you and what I tell the team."

That, naturally, led to questions about former striker Robert Lewandowski, who scored twice for Barcelona in their 3-0 win over Elche in LaLiga at the same time Bayern were losing at Augsburg.

On the question of missing a number nine, Nagelsmann quipped: "What will you do if I say 'yes' or if I say 'no'? We have the classic nine with [Eric Maxim] Choupo [Moting] and we subbed him in today.

"It doesn't matter what I say now. If I say 'no' you’ll say I don't see the problem, if I say 'yes' you’ll say we're missing Lewandowski."

At the end of the press conference, Nagelsmann added: "I'm thinking about all things. About the situation, about myself, about everything."

His opposite number was grateful for the kind words, and Maassen explained his team had won by taking risks.

Although Bayern had 10 shots to the hosts' two in the second half, Augsburg matched their efforts in the first 45 minutes when both recorded nine shots each.

"Thanks to Julian [for his congratulations]," Maassen said. "I'm very pleased with how my team played.

"We were willing to take risks, I told the team we could defend and maybe lose 1-0 or 2-0, or we could play high-risk. We could concede more goals, but we'd also have a chance to win, and you have to attack if you want to try and beat them, so we ran after plenty of balls.

"We gave away a lot of chances, but [goalkeeper Rafal] Gikiewicz was tremendous."