Premier League All-Stars: Who would be selected for North and South teams? Todd Boehly's suggestion for the creation of a Premier League 'All-Star' game attracted plenty of ridicule, but he certainly can't be accused of a lack of vision or creativity.

A relegation play-off tournament between the bottom four teams was one idea; but the other, which attracted most of the headlines, was for a North v South 'All-Star' game, pointing out Major League Baseball (MLB) in his native United States made $200million from such an event this year.

A potential Premier League 'All-Stars' game was the talk of football media on Tuesday, so at Stats Perform we decided to have a look at who might line up for the North and South.

It was decided the north-south cut-off point would see Nottingham Forest qualify for the North, ensuring each All-Stars team had 10 clubs to select from.

First up, we have unrestricted squads, so essentially the very best teams possible; then, we have squads that are limited to three players from each club and every single Premier League must have at least a single player selected. So, without any further ado, let's see who made the cut… 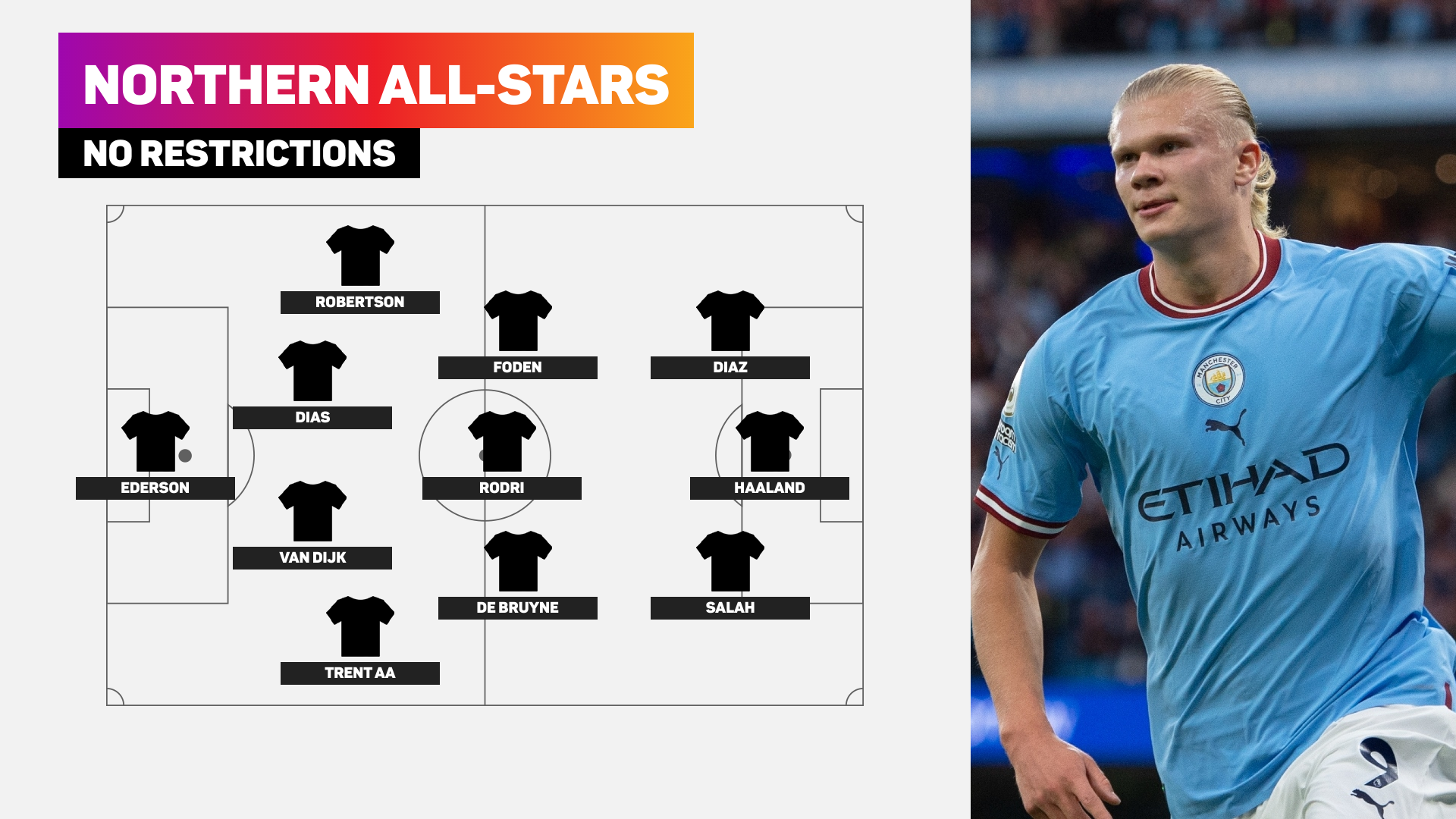 You knew the starting XI was going to look like that even before reading, didn't you? Manchester City and Liverpool obviously dominated the first team here, but it feels difficult to argue with almost any selection here.

The goalkeeper choice was probably the toughest, but only because Ederson and Alisson are both so strong and simultaneously significantly better than any other eligible shot stoppers in terms of their all-round game – Ederson ultimately got the nod owing to 13 more clean sheets over the past three-and-a-bit years, but either could've got the gig.

Similarly in defence, many of the North's options pick themselves. The centre-backs, Van Dijk and Dias, have each won the Premier League Player of the Season award in the past four years, while Alexander-Arnold and Robertson have at least 12 most assists than any other defender since the start of the 2019-20 season.

While the defence had a distinctively Liverpool look to it, City dominate the midfield because… well, they tend to dominate the midfield. Rodri provides the control and defensive protection, while Foden and De Bruyne can wreak havoc going forward and towards the flanks.

Salah and Haaland were obvious picks in attack. The Egyptian has been involved in 96 goals (66 scored, 30 assisted) since the start of the 2019-20 season, more than anyone else, while Haaland is arguably the most in-form striker in world football, having already netted 12 times in seven games for City.

Luis Diaz was perhaps the most uncertain one, but he's quickly become a key figure at Liverpool. His ability to cut inside or head for the byline makes him an unpredictable asset, and he's something of a double threat in terms of goals and creativity.

Cristiano Ronaldo's appearance on the bench owes much to his solid goal-scoring form last season. 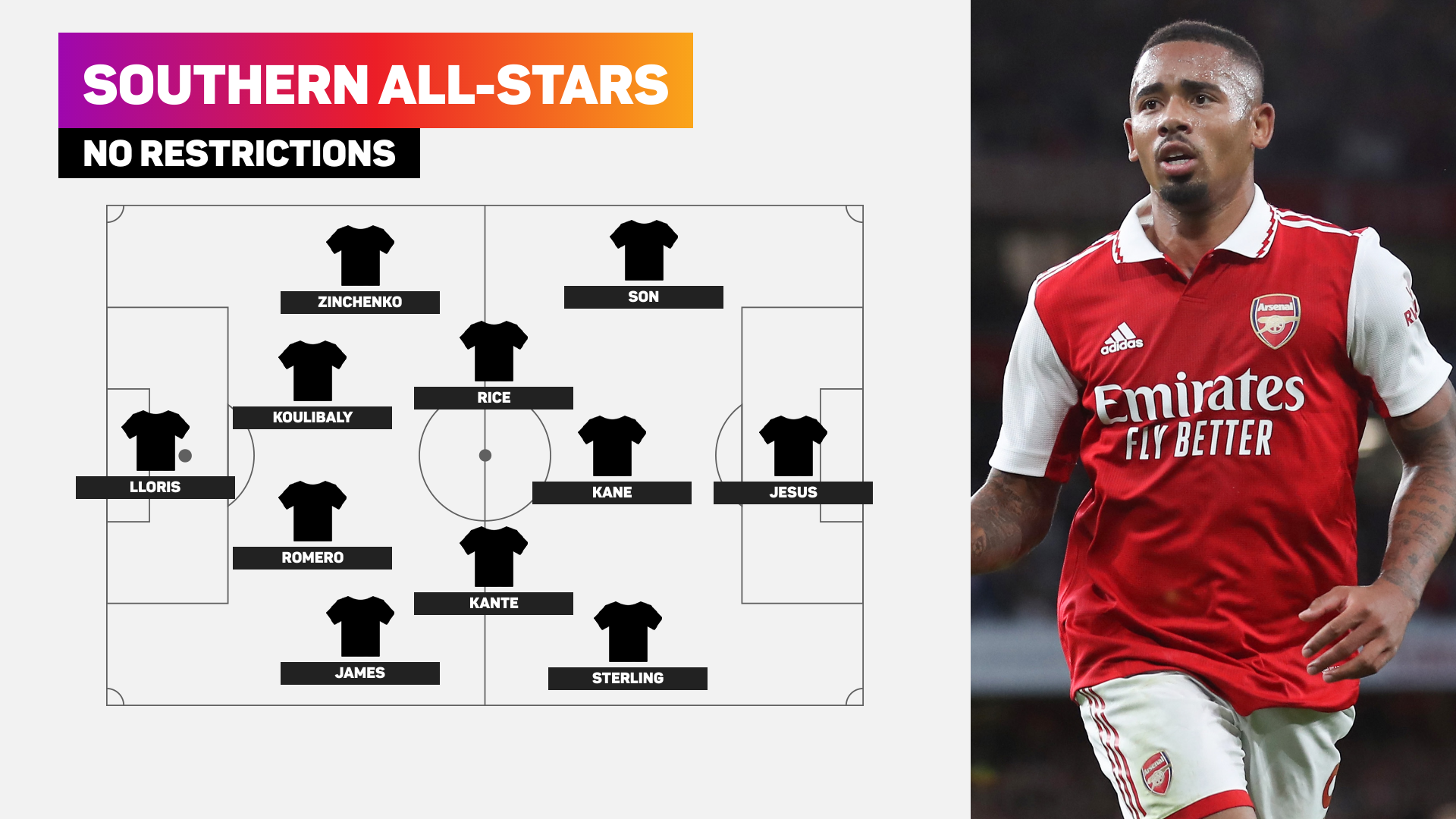 This team has it all. A World Cup-winning goalkeeper, a defence with an ideal blend of youth and experience, a combative midfield and four world-class attackers.

Lloris gets the nod in net. He's been one of the most consistent goalkeepers in the league since his arrival from Lyon 10 years ago, and based on Opta's expected goals on target (xGOT) conceded metric, Lloris has prevented 3.8 goals since the start of the 2020-21 season, significantly better than his South All-Stars back-up, Chelsea's Edouard Mendy (-3.8).

Chelsea star James is the right-back, with his 16 goal contributions (six goals, 10 assists) since the start of last season topping the charts for a defender. Koulibaly and Romero are a formidable centre-back pairing, while Zinchenko has four Premier League titles to his name from his time at Manchester City.

James and Zinchenko are brilliant attacking full-backs, but the defence will need screening, and that is where Kante and Rice come into their own. Both super ball-winners, Kante's relentless energy will be complemented by Rice's ability on the ball, as he has demonstrated at West Ham.

That midfield protection will be needed, with a four-pronged attack ready to lay waste to the North's defence.

Sterling might not have made a flying start at Chelsea but is the best pick on the right wing, with Son – who shared the league's golden boot award last season – on the opposite wing. Kane will play a slightly deeper role, behind Jesus, who has had more touches in the opposition box (66), attempted more dribbles (34), more dribbles in the box (8) and won more fouls (21) than any other player in the Premier League this season. 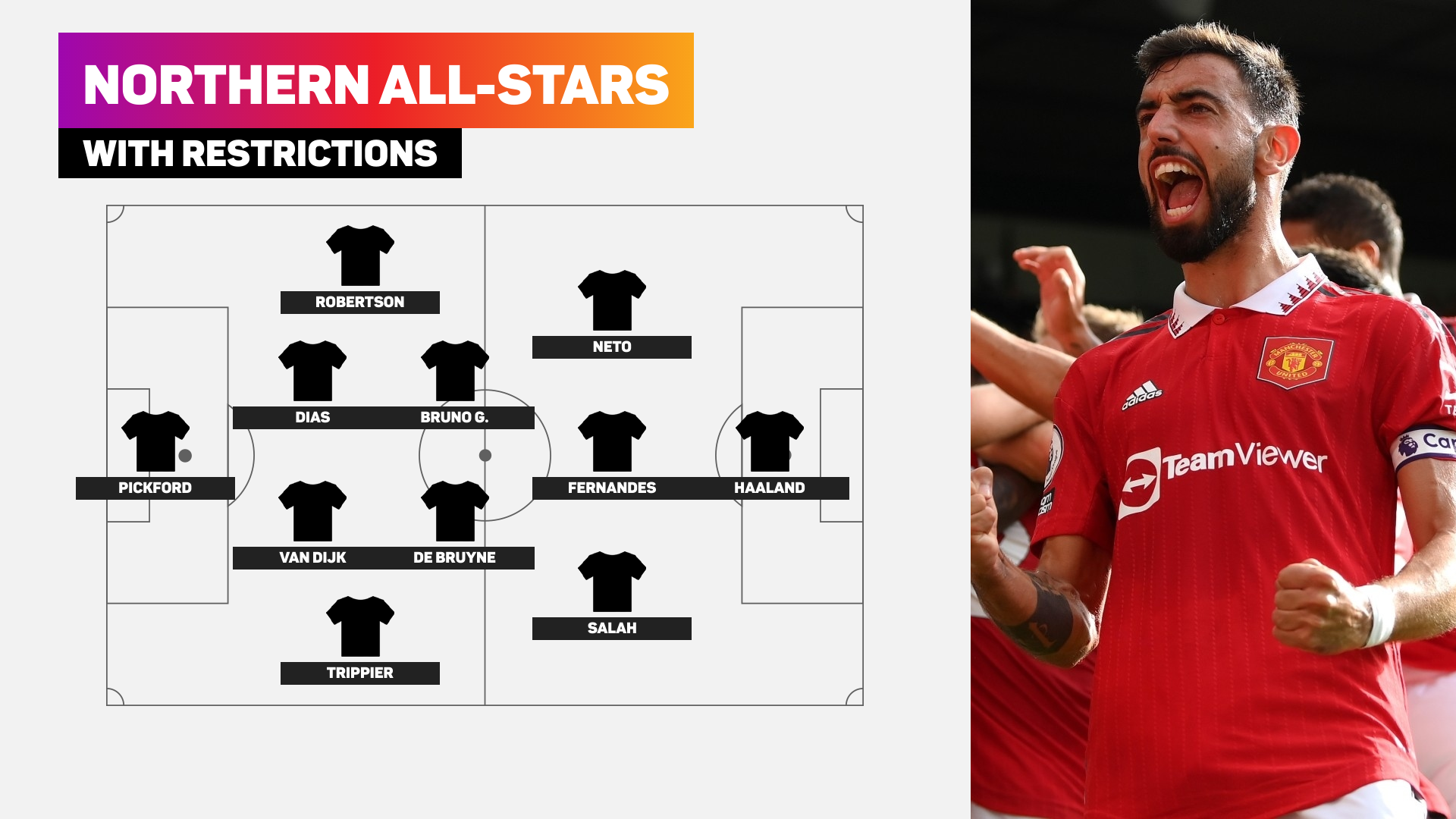 Our self-imposed restrictions of no more than three players from a given team gives the North All-Stars a distinctly different feel – nevertheless, Van Dijk, Dias, Robertson, De Bruyne, Salah and Haaland retain their places, for obvious reasons.

Probably the biggest casualty is Alexander-Arnold, but the North benefits from having another excellent forward-thinking option at right-back in Trippier, while Jordan Pickford starts between the posts – David de Gea was another option here, but the England international is better with his feet.

Bruno Guimaraes comes into the midfield, offering a valuable combination of bite and craft, while Fernandes will take up the number 10 position with De Bruyne dropping a little deeper – this shouldn't stifle the team's creativity too much given the Belgian is the only player with more chances created (239) than Fernandes (224) since the latter's Premier League debut.

The other new face in attack is Pedro Neto. Perhaps a wildcard choice, but the Portugal international is an exciting winger with lots of pace and trickery. While Salah will cut in off the opposite flank, Neto looks to get crosses into the box, and that could be an effective route to goal knowing the predatory instincts Haaland has.

Again, Ronaldo is held back in reserve. 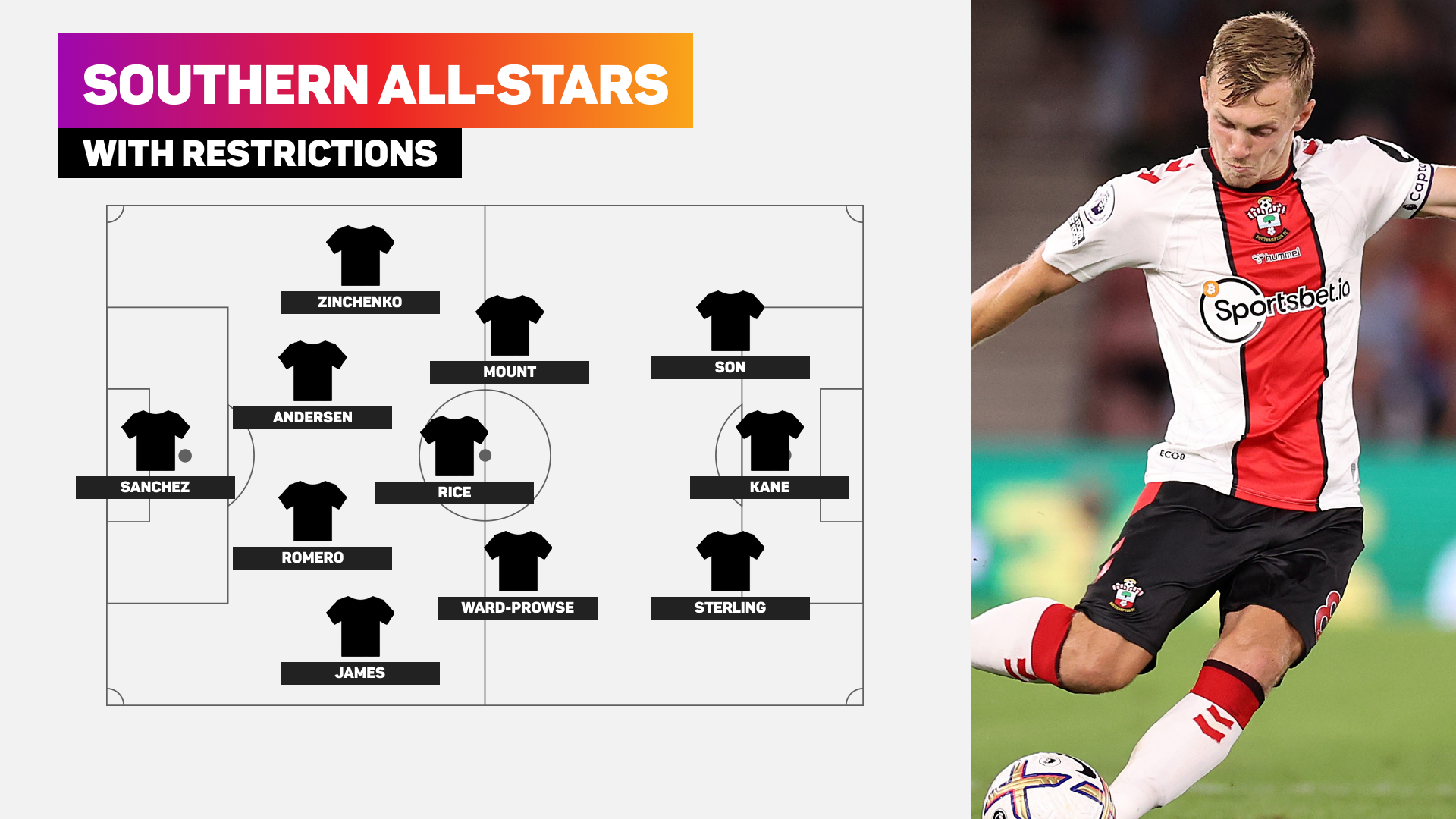 Robert Sanchez has been a standout performer for Brighton under the now Chelsea boss Graham Potter, and he replaces Lloris now the restrictions have come into play. He has kept 24 league clean sheets since making his debut in November 2020, which trails only four other goalkeepers.

James, Romero and Zinchenko all keep their places in defence, though Koulibaly does not. He makes way for Joachim Andersen, who has been excellent since signing for Crystal Palace in 2021.

We have switched to a midfield three for this side, with Rice staying in the team but playing a deeper, anchoring role. Alongside him are two new faces in the form of England team-mates Ward-Prowse and Mount. Both provide energy and creativity in abundance.

Ward-Prowse's set-piece quality – no midfielder has scored more goals or created more chances from set plays since the start of last season as the Southampton captain – is a huge threat, while Mount has contributed to 21 league goals since the beginning of 2021-22.

Jesus is the unlucky striker to drop out of the starting XI, though he is on the bench, with Sterling, Kane and Son leading the line.