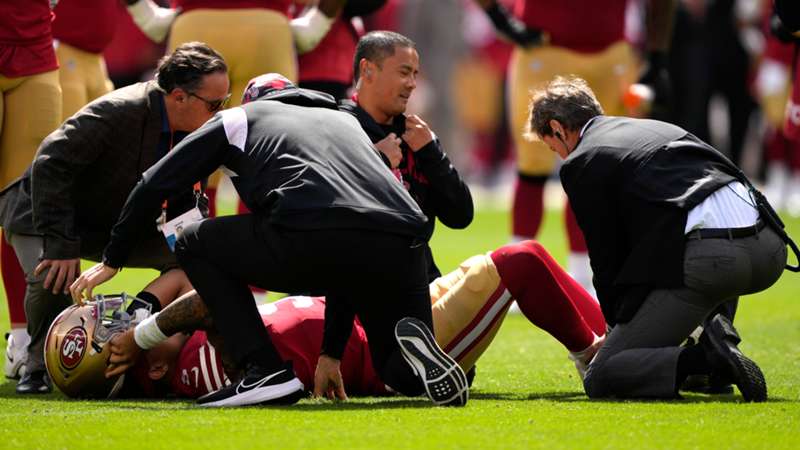 Lance's first season as San Francisco's starter is over only two games in after the 2021 No. 3 overall pick suffered the injury in Sunday's win over the Seattle Seahawks.

Lance's right leg bent awkwardly when tackled by two Seattle defenders on a designed run on just the 49ers' second drive of the game. He was carted off after having his leg placed in an air cast and quickly ruled out of the contest.

"It's always tough, especially when it's a big one like that," Shanahan stated. "It's a very sad moment, but you don't have time to sit there and think about it.

"We were real happy about the win, but it was a little sombre once you got in the locker room and you see him."

Lance spent his rookie season as the backup to veteran Jimmy Garoppolo, but was declared the team's starter this offseason.

The 22-year-old did struggle in last week's 19-10 road loss to the Chicago Bears, completing just 13 of 28 passes for 164 yards and an interception in a game played in rain-soaked conditions.

Lance took to Twitter to post a message to thank fans for their support on Monday, writing: "Truly appreciate all of the messages and prayers. Surgery was a success and I am ready to attack this rehab process.

"We will never understand why, but I trust that it's all a part of His plan. I will be back better than ever. This chapter is going to make the story even greater!"

Truly appreciate all of the messages and prayers. Surgery was a success and I am ready to attack this rehab process. We will never understand why, but I trust that it’s all a part of His plan. I will be back better than ever. This chapter is going to make the story even greater! pic.twitter.com/l5hoBWsLDw

Garoppolo replaced Lance in Sunday's win and threw for 154 yards and a touchdown, with no turnovers on 13-of-21 passing.

"I thought he did a real good job coming off the bench, made some real key throws," Shanahan said. "I'm real proud of Jimmy and how he came in and was ready for the moment and helped us get a win."

Garoppolo did not practice at all during training camp as he recovered from shoulder surgery and spent the summer the subject of trade rumours.

The nine-year veteran ultimately remained with the 49ers on a reworked contract that slashed his 2022 salary from $24.2million to a $6.5m base, though he can earn close to an additional $9m in incentives.

The 49ers have had considerable past success with Garoppolo at the helm, as he owns a 31-14 record in 45 regular-season starts since joining the team in a trade with the New England Patriots during the 2017 season.

Garoppolo helped San Francisco reach the Super Bowl during the 2019 season and led them to last season's NFC Championship Game. The 30-year-old threw for 3,810 yards and 20 touchdowns with 12 interceptions in 15 starts in 2021.