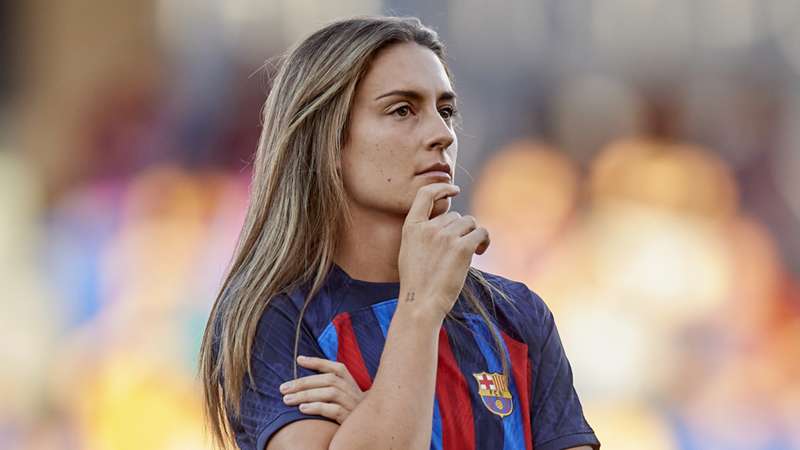 Alexia Putellas has backed the 15 players who are refusing to play for Spain women's national team boss Jorge Vilda, after the federation doubled down on its support for the coach.

Spain's football federation, the RFEF, was accused in the statement of using "an infantilising tone" when responding to what the players consider a serious matter.

The players said it was with "regret" that they had taken their "extreme" stance, but that it was decided upon with a view "to be able to achieve maximum professional and personal success again".

Putellas is injured and not in contention for current Spain squads, with reports saying she was not among the players who emailed the RFEF to state their unavailability for future selection by Vilda.

The statement she shared on social media condemned the RFEF for revealing the players had each expressed worries about their "emotional state" and "health".

The precise cause of their dissatisfaction with Vilda has not been disclosed, although the players' statement said: "In no case have we RESIGNED from [the] Spanish football team as indicated in the RFEF's official statement.

"That is why we requested in our communication sent to the RFEF not to be summoned until situations are reversed that affect our emotional and personal state, our performance and, consequently, the results of the national team, and that could derive in undesirable injuries. These would be the reasons that lead us to make this decision."

The players said they "want a firm commitment to a professional project", in order "to get the best performance from a group of players with whom we believe that more and better goals can be achieved".

They stressed they had no interest in "entering into public wars", yet that is how this is now shaping up, with the two sides very much at odds.

The players said they "have never asked for the dismissal of the coach", saying they "understand that our job is not to choose said position", and said they hoped to explain "in a constructive and honest way" how the team's performance can be improved.

It was wrong, they said, to consider their action as "a whim or blackmail", and pointed to the negative impact being out of the team would have on each of them.

"Last but not least," the players added, "we will not tolerate the infantilising tone with which the RFEF concludes its statement.

"We regret that in the context of women's sport we have to go to this extreme, as unfortunately has happened in other national teams and other sports historically worldwide, in order to advance in a powerful and ambitious professional project for the present and for future generations."

The concluding line of the RFEF's statement on Thursday, which has caused dismay, said the players could only return to Spain duty in future "if they accept their mistake and ask for forgiveness".

Ana Alvarez, director of women's football at the RFEF, said on Friday that Vilda's position was "unquestionable". He has an agreement to remain as coach until 2024, and his team have qualified for next year's World Cup.

Alvarez also said it would be "in bad taste" and "not reality" to suggest there was anything other than sporting reasons behind the women's opposition to Vilda remaining in charge.

Alvarez said the 15 rebels would be granted their wish of being considered unavailable for selection, and that Vilda would choose his squads from those willing to play for the national team.

Veteran United States women's national team star Megan Rapinoe told the disenchanted Spanish group she would stand with them, saying in an Instagram post: "This many players together like this is so powerful. We should all listen."