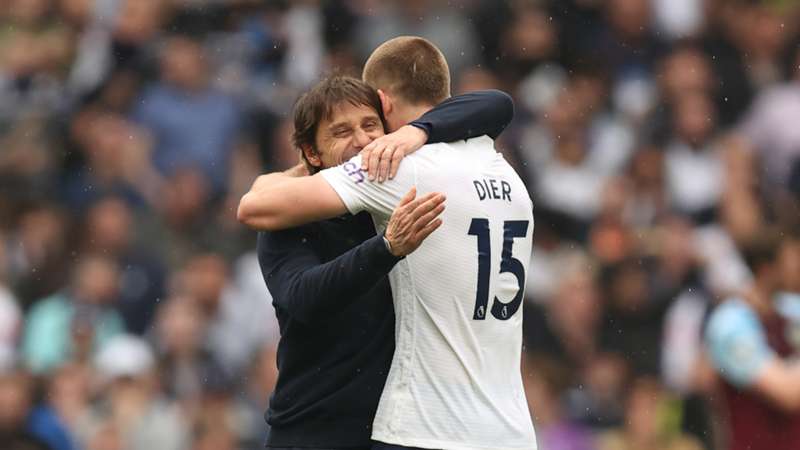 Eric Dier has thanked Antonio Conte and his Tottenham team-mates for helping him earn a recall to the England squad, which he hopes is "just a starting point".

The most recent of his 45 caps came in November 2020, but an upturn in form at club level has Dier in contention for a World Cup spot.

Dier's improved performances have coincided with the appointment of Conte last November, and the 28-year-old is confident he can continue his upward trajectory.

"I am just looking forward to going and I think as my manager [Conte] said during the week, for me it is my ambition for this just to be a starting point for me," he said.

"I think I can still do a lot more. Honestly, [a recall] wasn't what I was thinking about.

"I was just thinking about being as good a player as I can be for Tottenham and everything else that happens is a consequence of that.

"I'm just thankful for the way my team-mates, coaching staff and everyone at Tottenham has supported me, pushed me and tried to help me get back to the national team."

I told @JTanganga99 to put me in his fantasy team but he didn’t have any belief in me. pic.twitter.com/2ZXNVHVnfQ

Dier started all four of England's matches at Euro 2016 and was used six times at the 2018 World Cup, but he was not part of Southgate's squad for Euro 2020.

He is back involved with the Three Lions after performing at a consistent level across Tottenham's nine games this season, during which he has scored twice.

The most recent of those goals came in Saturday's 6-2 win against Leicester City, with Son Heung-min grabbing the headlines after scoring a 13-minute hat-trick.

And Dier joked Son, who was dropped for the first time this season after failing to score in his first eight outings, should start on the substitutes' bench regularly.

"We told him the manager should drop him more often if he scores a hat-trick every half an hour," Dier said.

"Everyone is delighted for him. Obviously for someone who lives for scoring goals it has been a difficult start to the season.

"I think that's no secret. But he's come back in an emphatic way today – the floodgates have opened."