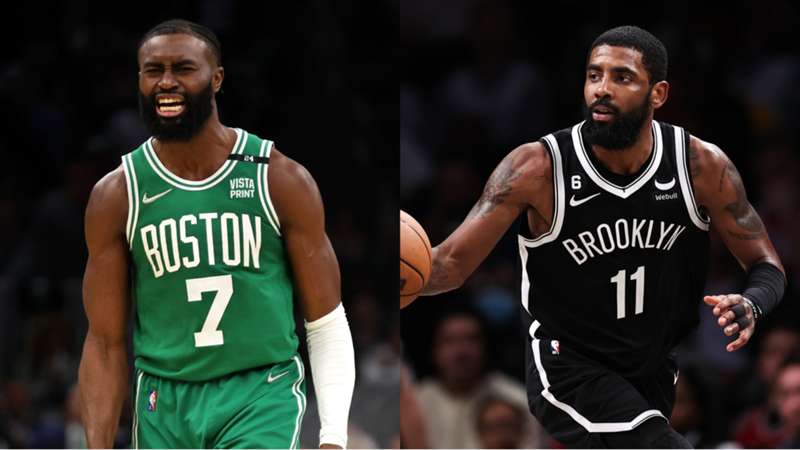 Jaylen Brown insists he does not endorse the protesters who gathered outside Barclays Center to welcome Kyrie Irving's return from suspension for the Brooklyn Nets on Sunday.

He returned to the fold against the Memphis Grizzlies, a game that saw approximately 100 members from Israel United in Christ gather outside the venue, chanting and handing out flyers headlined "The Truth About Anti-Semitism" and "The Truth about Slavery".

The group has been designated a hate group by the Southern Poverty Law Center.

Boston Celtics guard and NBPA vice-president Brown retweeted a social media video of the group with the caption "Energy".

Brown later backtracked on the post insisting he "was not aware of what specific group was outside of Barclays Center" and reiterated that stance when speaking after Monday's defeat to the Chicago Bulls.

"I saw a large group of our people from our community showing support for [Kyrie] and his return," Brown said.

"Me being proud of that support and being proud of our community for doing that does not mean I endorse or celebrate some of the things that were being done or being said.

"My instinct when I saw this was I didn't notice which group it was. I just noticed the support, and that's what I commented on. I reemphasise that I don't think that everything that is said or being done or being said is something I endorse or represent."

Brown added he wanted to promote "brown and black people standing together on our issues rather than seeing images of violence in our media, music and movies that we don't entirely promote or profit from".

Brown has criticised the Nets' handling of Irving's suspension and the terms set out for him to return to court.

"I've been in contact as a union member, as a former team-mate just to show support for the situation that [Irving's] been going through," Brown added.

"Being exiled from the game, of course, emotionally is a lot on our league, but it's a lot on everyone who's a fan of this game.

"Kyrie's contributed in a lot of ways to the game of basketball, so for him to be able to come back and be on the floor last night, I thought was something to celebrate.

"I thought that was something to support. The NBA, the Brooklyn Nets decided whatever the disagreements were or the concern was, was obviously handled and we were moving on. I was supporting that decision."