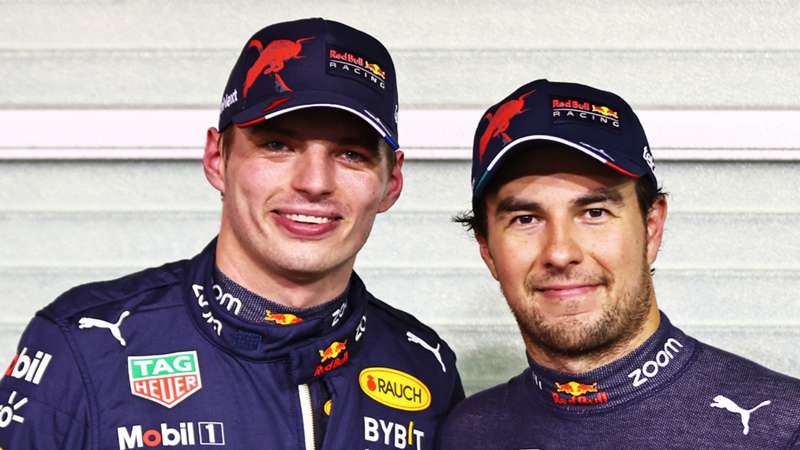 Max Verstappen was thrilled to join team-mate Sergio Perez in locking out the front row at the Abu Dhabi Grand Prix for Red Bull, following a week of controversy.

Lack of teamwork was not an issue in Saturday's Abu Dhabi qualifying, however, with Verstappen helping Perez to second place, while securing for himself a third consecutive Yas Marina circuit pole position.

"It was a bit up and down qualifying, started off quite well, Q2 was a little bit more messy, I don't know why. I couldn't quite get the grip together," Verstappen said.

"In Q3 it all felt a bit more normal, though we had a bit of a scare as the car turned off before the first run, so we had to reboot everything.

"We're very pleased and very happy that both cars are on the front row. Of course, we want to win the race, but we also want to finish second with Perez in the championship, so that's a great start for tomorrow.

"It always sounds great, today was amazing, I still expect it to be a good battle tomorrow but at least we have two cars there, so we can do what we want."

Perez specifically mentioned the teamwork conducted with Verstappen, who finished 0.228 seconds in front of the Mexican.

"I didn't make the final step in Q3, especially in the first run, so we were a bit behind, but it's good to lock out the front row tomorrow. Max did a great job for me, we worked as a team really strongly in that final run," Perez said.

"It's the place we deserve, Red Bull were stronger," said Leclerc. "We are still in quite a good position, it's going to be close to Perez for sure.

"I'm sure we can work with Carlos, I have no doubt in that, we'll try to maximise the team result. Red Bull is a bit stronger on a Sunday, so it's going to be tricky, but hopefully we can do it and get second place in the championships."