Lewis Hamilton 'looking forward' to trading in this year's Mercedes 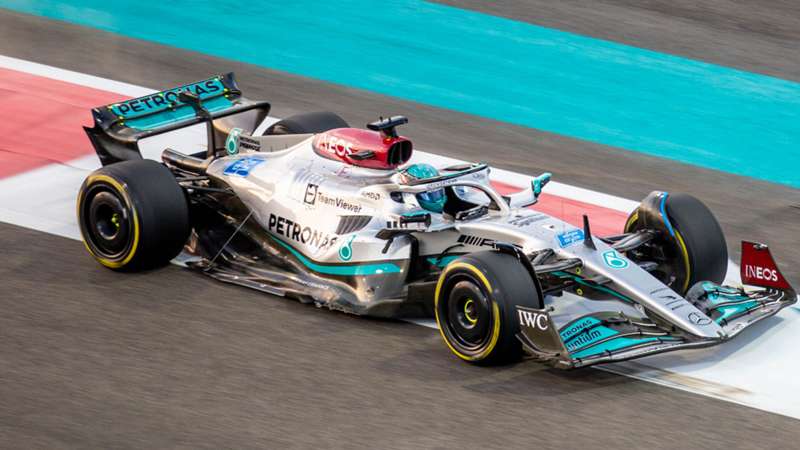 Lewis Hamilton is looking forward to a final race in the Mercedes W13 at the Abu Dhabi Grand Prix, admitting it is a car he never wants to drive again.

Having fought Max Verstappen all the way for the title last year, only losing in controversial circumstances in the final moments of the season at the Yas Marina Circuit, Hamilton has not been a threat in 2022 as the Red Bull star waltzed to a second consecutive championship.

Instead, Hamilton was battling with 'porpoising' issues early in the campaign and, after some respite from the issue following the mid-season break, he saw those problems emerge again in Saturday's qualifying session.

Mercedes' campaign has been a frustrating one for Hamilton, and he is eager to bring his spell at the wheel of this particular car to a close.

"We definitely weren't expecting to see such a big gap, but we are losing 0.6secs on the straight," Hamilton told the BBC.

"Kind of reminiscent of some of the previous races before, like Austin. And bouncing is back, so that's not been easy.

"I am looking forward to the end of Tuesday, which is the last time I have to drive this thing. I don't ever plan to drive this one again. It won't be one of the ones I request to have in my contract.

"We have some downforce. We just need a much more efficient car and everybody in the team knows exactly what are the problems and where we have gone wrong, so I'm pretty confident they are not going to build the next car with any of those characteristics."

One last sleep before riding into retirement.

A disappointing showing in qualifying leaves Hamilton fifth on the grid for Sunday's race, ahead of team-mate George Russell. It makes the experienced Briton highly likely to finish the 2022 season without a race win – which would be the first time in his career he has gone without.

Team principal Toto Wolff has insisted the lack of a win is not something that has been in the mind of Hamilton.

"He says that the one victory a year isn't really a record that bothers him," Wolff said. "If I'm trying to put myself in his shoes, where I was before Brazil, it didn't particularly bother me whether we would win a race this season, because all our eyes are already on next year.

"But having won one, it felt pretty good. At least nobody could say you didn't win a race."

Looking at setting up seven-time champion Hamilton for a title tilt in 2023, and banishing this season's winless run, Wolff said: "I don't think this particular record is an important one for him, but we need to provide him with a car next year in which he can fight for victories and championships. That's most important and he knows that."

Hamilton heads into next season, his last contracted campaign with Mercedes, level with Michael Schumacher for the most career world titles in Formula One.

Sunday's Abu Dhabi race sees the Red Bulls of Max Verstappen and Sergio Perez on the front row, followed by the Ferrari pair of Charles Leclerc and Carlos Sainz, with the Mercedes cars occupying row three.