Prescott, Pollard and the Cowboys dominate the Vikings, Adams wins it for the Raiders 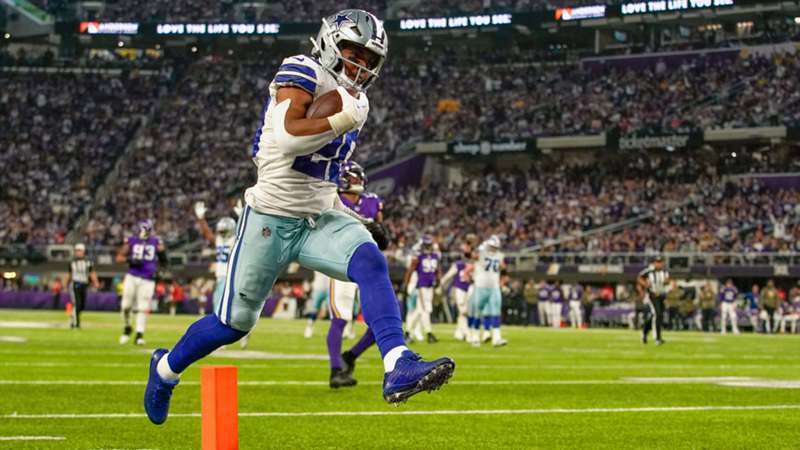 The Dallas Cowboys sent a statement to the rest of the NFL with an eye-opening 40-3 road win against the Minnesota Vikings on Sunday.

In his return from injury, Cowboys running back Ezekiel Elliott scored the game's first touchdown, and his backfield partner Tony Pollard made it 14-3 in the second quarter when he took a short pass down the sideline for his own touchdown.

Pollard would strike again to begin the second half, this time getting on the end of a deep pass from Dak Prescott for a 68-yard touchdown, and it was 37-3 late in the third quarter after Elliott also forced his way in from the one-yard line for his second score.

Prescott completed a terrific 22 of his 25 passes to set a new season-high completion percentage (88 per cent), tallying 276 yards, and it was the first game this campaign he did not take a single sack.

Pollard and Elliott finished with 15 carries each, while Pollard also collected 109 receiving yards from six catches.

In his past three games, Pollard has had 326 rushing yards, 138 receiving yards and six touchdowns.

In a low-scoring, grinding contest, the Las Vegas Raiders needed some brilliance in overtime from Davante Adams to defeat the Denver Broncos 22-16.

There were no touchdowns in the second half as both sides continued to fight for field goals, and the Raiders came back to tie it at 16-16 after mounting a crucial drive with less than two minutes remaining in regulation.

In overtime, the Raiders won the toss and opted to receive the ball first, and it paid off. After a deep completion down the middle to Foster Moreau, Adams completely shook his coverage and got himself wide open for the game-winning score.

Adams finished with seven catches for 141 yards and both of the Raiders' touchdowns.