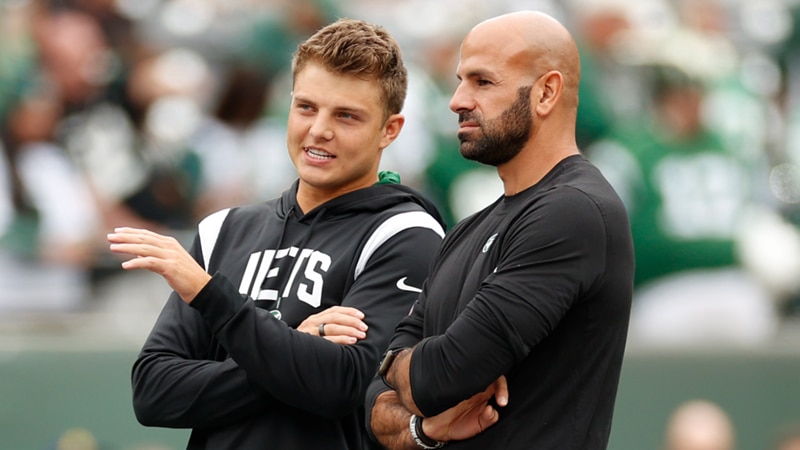 Zach Wilson's career with the New York Jets is not over, reiterated head coach Robert Saleh after confirming his decision to demote him.

Saleh had said benching Wilson, who was the 2021 second overall pick, was the furthest thing from his mind but on Wednesday announced he had changed his tune ahead of the Week 12 matchup against the Chicago Bears.

"The big thing I want to make sure I address on this one... Zach's career here is not over," Saleh told reporters.

"I know that's gonna be the narrative, I know that's what everyone wants to shout out and that's not even close to the case. The intent, the full intent, is to make sure Zach gets back onto the football field at some point this year.

"When that is, I'll make that decision, I'm going to take it day-to-day. The biggest thing with Zach, it's the same things we've talked about, is the young man needs a reset.

"His decision-making has been fine, his training habits have been fine, but there's some basic fundamental things that have got really out of whack for him and this is just an opportunity for him to sit back and focus on those things.

"That's something that I feel like he's going to be able to do."

Mike White will start for the 6-4 Jets against the 3-8 Bears with Joe Flacco as his back-up, while Wilson will be inactive.

Coach Saleh says the intent is for QB Zach Wilson to get back on the field at some point this year. pic.twitter.com/R8Cg22B2Wu

"Is it a small step back? Absolutely," Saleh said. "But do I think it's going to be a great leap forward when he gets a chance to reset himself? Absolutely.

"This is not putting a nail in his coffin. This is not that. This is not close to that. But I do believe, at the end of this, it's going to be a rejuvenated, renewed young man."

The fall-out from the Pats loss included Wilson being criticised for failing to take accountability for his own poor performance where the Jets defense only conceded three points.

But Wilson moved to apologise to his teammates on Wednesday, offering support for White and vowing to win back the QB role.

"I had a sick feeling in my stomach," Wilson said. "It was the only thing I could think of the last couple of days. I wanted the opportunity to talk to those guys and really make it from the heart.

"I wouldn't say [I was] necessarily surprised because I haven't been doing my job. Of course, I would like to not agree with the decision and everything, but it comes down to I have to play better."

For his career, Wilson has completed 55.6 per cent of his passes for 3,613 yards, 13 touchdowns and 16 interceptions.

"This is going to be a good opportunity, a humbling opportunity, for me to put my head down and work harder." - @ZachWilson pic.twitter.com/FLiAH1ZHJa