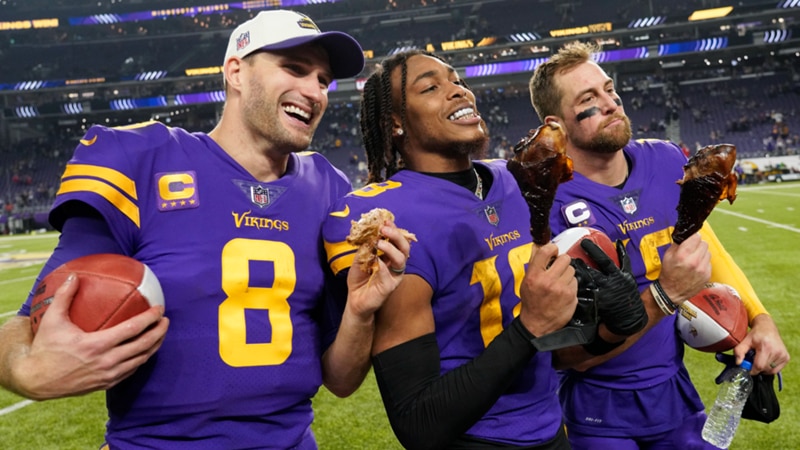 Minnesota Vikings head coach Kevin O'Connell says people forget Justin Jefferson is only in his third NFL season after his starring display in Thursday's 33-26 win over the New England Patriots.

With six games left in the regular season, the 23-year-old also surpassed Randy Moss' NFL record for the most receiving yards of any player through their first three seasons in a career.

Two-time Pro Bowler Jefferson is second in the NFL for receiving yards this season (1093), behind only Tyreek Hill (1148).

"People forget sometimes it's still only year three," O'Connell told reporters. "He's learning so much each and every week but the talent and the competitive drive that he has just makes him a very special player."

Jefferson played a key part in Adam Thielen's game-winning touchdown with a double-team contested catch for a 36-yard gain. Thielen scored on the next play from a Kirk Cousins' pass, with Jefferson double teamed.

"He was double teamed a lot tonight," O'Connell said. "Had some success against double team looks. When he got single coverage Kirk found him a few times, got a great double move there to set up Adam's go-head touchdown.

"He's a special player. He means a whole heck of a lot to our offense, to our team, it was a big night for Justin. Quite frankly, I'm just so proud of the way he battles, the grit, the determination, and the preparation that he's put into this."

Cousins also earned praise from O'Connell, with the win coming after a blowout 40-3 loss to the Dallas Cowboys on Sunday where the QB completed only 12-of-23 passes for 105 yards.

"Kirk Cousins was phenomenal tonight, getting us in and out of the plays he did, standing back there and making some big, big throws," O'Connell said.

"I can't say enough about the protection as well. It's not easy against that defensive structure, so I give our guys credit."