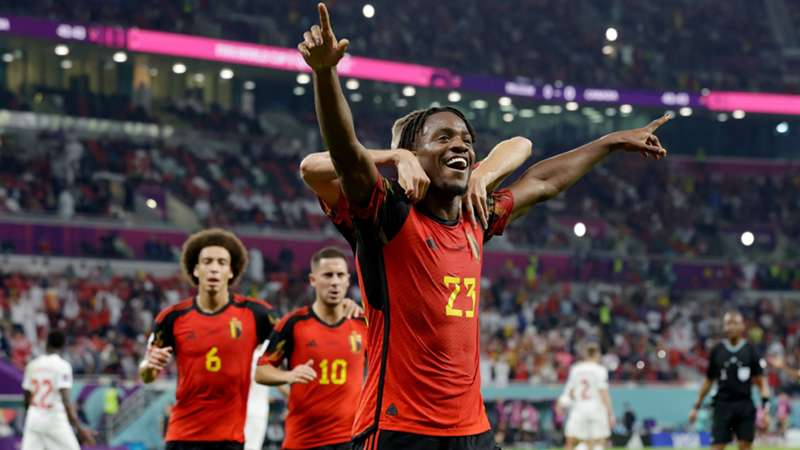 Michy Batshuayi scored the only goal as Belgium scraped past a spirited Canada 1-0 in their 2022 World Cup opener at the Ahmed Bin Ali Stadium.

Roberto Martinez's side were grateful to Thibaut Courtois, who saved an early Alphonso Davies penalty, as they generally struggled against the nation ending their 36-year absence from the finals.

Nevertheless, Belgium stretched their group-stage winning streak to eight matches, with no side enjoying a longer run in the competition's history (level with Brazil).

Belgium endured a shaky start against the Canucks, who were awarded a penalty when VAR ruled Yannick Carrasco had handled Tajon Buchanan's shot in the box, but Courtois guessed correctly to keep out Davies' tame spot-kick by diving to his right.

The first coach to guide a nation to both the women's and men's World Cups, John Herdman saw his side continue to carry the greater attacking threat. Alistair Johnston stung Courtois' palms with a fierce strike, while Buchanan and Atiba Hutchinson were off target.

But Belgium snatched the lead against the run of play just before half-time; Batshuayi latching onto Toby Alderweireld's long ball before firing past Milan Borjan.

Though they edged possession, Belgium continued to look off their game as they registered just one shot on target after the break.

Canada looked to capitalise with the introduction of top scorer Cyle Larin, whose header called Courtois into action with 10 minutes remaining, but they were unable to find an equaliser as their opponents held on for a narrow victory.

What does it mean? Belgium struggle against spirited Canada

Although far from their fluent best, Belgium moved to the Group F summit following Croatia's goalless draw with Morocco earlier on.

Despite the defeat, it was a historic day for Canada, who returned to the finals after 36 years away and were unfortunate not to break their duck after Davies' saved penalty.

With Lukaku's return date uncertain, Batshuayi stepped up to the plate with his 27th international goal in 49 caps – moving him joint-sixth with Joseph Mermans on his country's all-time list.

No player has appeared more times for Belgium at a major tournament than Courtois (23, level with Jan Ceulemans).

The Real Madrid goalkeeper also edged closer to becoming the Red Devils' seventh centurion by earning his 98th cap, and he celebrated the milestone with a clean sheet, as well as superb reflexes to deny Davies from the spot.

Both sides are back in Group F action on Sunday. Belgium will look to produce an improved performance against Morocco, while Canada cannot afford another defeat against 2018 finalists Croatia.