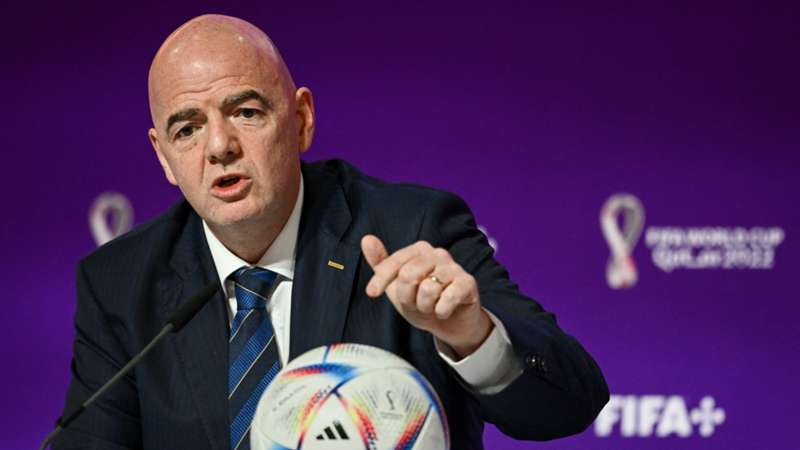 Gianni Infantino expects Qatar 2022 to be "the best World Cup in history", he told reporters on Saturday while suggesting several criticisms of the finals were hypocritical.

An extraordinary opening speech saw the FIFA president respond on a wide range of matters, claiming he had received "almost threats" around the subject of migrant workers' rights.

But Infantino's enthusiasm for the action on the pitch, which begins on Sunday, remained undimmed.

One prominent complaint has been around the staging of the World Cup in the European winter – especially with matches in some domestic leagues finishing less than a week before Qatar's opener against Ecuador.

Antonio Conte last week described England captain Harry Kane as "very, very tired" due to a relentless pre-World Cup schedule, yet Infantino suggested this issue would be worse at the end of the season.

He is of the view this tournament will set a new benchmark.

"When the players have been playing in July, they are really tired, especially the best players who play in the Champions League," he said.

"It will be an exceptional World Cup, and I think we will see the best World Cup in history."

All eight stadiums used in Qatar are within a 55km radius of the capital of Doha – and Infantino sees this as another big positive.

He added: "It will be a very compact World Cup. No travel for the teams, ideal conditions, temperatures, venues, hotels, stadiums.

"Everything is done for them to feel good and play good.

"It's also the first time fans from all countries are coming to the same place for the whole tournament. This is unique.

"When we say football unites the world, this is exactly what it is."

Infantino is confident fans will enjoy the tournament – "to the fans who don't want to watch, don't watch," he added – and his defence of Qatar as hosts went beyond merely the logistics.

Asked to reply to predecessor Sepp Blatter's description of a "mistake" in the bidding process, Infantino said: "I've nothing to answer because I was not there. At that time, I was even known as one of the biggest FIFA critics."

In an hour-long monologue at the start of his news conference, the FIFA chief detailed at length steps that are being made to improve migrant workers' rights following deaths on World Cup building sites.

But Infantino was reluctant to accept criticisms on the topic from Europe, explaining: "We know there are many illegal workers in Europe, living in conditions that aren't the best.

"Those who reach Europe or want to go to Europe, they have to go through a very difficult journey. Only a few survive.

"So, if you really care about the destiny of these people, these young people, then Europe could also do what Qatar did: create legal channels for at least a number or percentage of these workers, who can come to Europe, give them some work, a future, hope.

"In Qatar, of course, there are things that still don't work, but this moral lesson-giving is one-sided, it is just hypocrisy."

He said: "I'm European. I think for what we Europeans have been doing in last 3,000 years, we should be apologising for next 3,000 years before giving moral lessons to people."