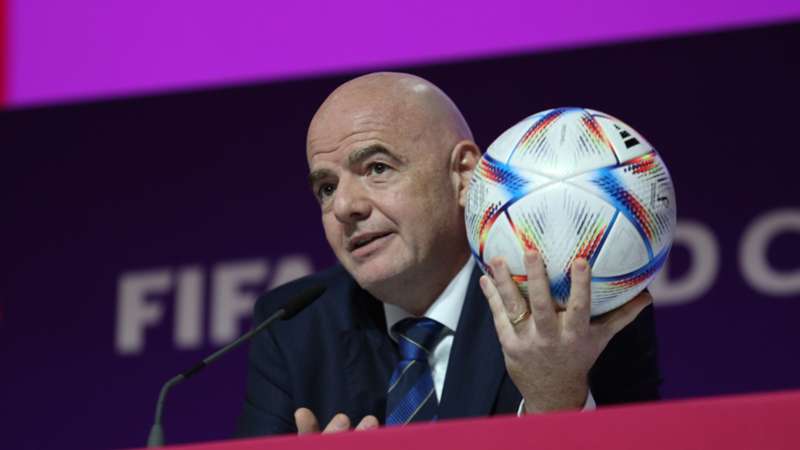 Gianni Infantino's press conference in Doha ahead of the Qatar World Cup was scheduled to last 45 minutes.

The best part of the proceeding hour had involved a long and winding monologue from the Swiss, who targeted the hypocrisy of the western media and insisted he must take criticism, not the players and coaches, for the controversy surrounding the upcoming tournament.

Infantino also defended the Qatari state, insisting that engagement must be prioritised over possible provocation over matters such as human rights and migrant worker pay and conditions.

With questions fielded after Infantino's monologue, the press conference lasted over 90 minutes. Here are the key points.

"I remember what happened with their passports, their medical checks, with their accommodation and when I came to Doha for the first time after I was elected FIFA president I went to see some of the accommodation and I was brought back to my childhood. I said to the people in Qatar, this is not right, and the same way that Switzerland has become an example of tolerance, inclusion and rights, Qatar has made progress as well."

"We know there are many illegal workers in Europe, living in conditions that aren't the best. Those who reach Europe or want to go to Europe, they have to go through a very difficult journey. Only a few survive.

"So, if you really care about the destiny of these people, these young people, then Europe could also do what Qatar did: create legal channels for at least a number or percentage of these workers, who can come to Europe, give them some work, a future, hope. In Qatar, of course, there are things that still don't work, but this moral lesson-giving is one-sided, it is just hypocrisy."

On being discriminated against personally

"Of course, I am not Qatari, I am not Arab, I am not African, I am not gay, I am not disabled, I am not a migrant worker but I feel like them because I know what it feels to be discriminated against by a bully. As a foreigner in a foreign county, as a child at school, I was bullied at school because I had red hair and freckles. I was Italian, and didn't speak good German.

On "racist" reporting and "organising a World Cup, not a war"

"Help, don't divide. Try to unite. The world is divided enough. We are organising a World Cup, not a war. Where anyone can come and enjoy. Look at the city – it's beautiful, it's happy, they celebrate.

"They went to see the teams, and what happened when they did – 'well they don't look like English, they look like Indians!'. Can someone who looks Indian not cheer for England? Or Spain or Germany? You know what this is – it's racism, pure racism. Everyone in this world has a right to cheer for who they want."

The #FIFAWorldCup party is about to get started!

On the "best World Cup in history"

"Qatar is ready and it will be the best World Cup ever. As soon as the ball rolls, people will focus on that. I think this World Cup will be an exceptional one from a football point of view. For the first time, the teams will stay in one place, and play in one place.

"They don't need to travel, spend the night and then recover. Of course, the temperature is a bit warm, but during the next days it will be perfect. Also, when the players have been playing in July, they are really tired, especially the best players who play in the Champions League. It will be an exceptional World Cup and I think we will see the best World Cup in history."

On banning alcohol in stadiums

"If this is the biggest issue we have, I will sign immediately and go to the beach until December 18. Every decision taken in this World Cup is a joint decision between Qatar and FIFA. It's discussed, debated and taken jointly. There will be fan zones where you can buy alcohol. I think if for three hours a day you cannot drink a beer you will survive.

"We tried, the late change of policy because we tried to the end to see if it's possible. It's one thing to have the designs, it's another to put them in place. Budweiser is a great partner of FIFA. A few weeks ago we were shaking hands with their CEO to continue our partnership until 2026. Partners are partners in good and bad times."

"I can confirm that everyone is welcome. If you're a person here or there that says the opposite, well it's not the opinion of the country, and it's certainly not the opinion of FIFA. This is a clear requirement, everyone has to be welcome. Whatever religion, race, sexual orientation or belief that she or he has, everyone is welcome – this is our requirement and the Qatari state sticks to this.

"Do you want to stay home and criticise, say how bad they are – these Arabs or Muslims or whatever, because it's not allowed to be publicly gay. Of course, I believe it should be allowed, but I went through a process."

On taking a tournament to... North Korea

"Tolerance starts with ourselves, we shouldn't spread aggression, we have to spread understanding. If we wanted to organise a tournament in North Korea, then I would try. I have been a few years ago, to try and organise part of the women's World Cup there. I was not successful, but I would try again."

"Here I have to deal with other topics. If you want to criticise somebody, don't criticise the players, the coaches, let them focus on football and making their fans happy.

"If you want to criticise someone, criticise me, I am here, crucify me. Don't criticise Qatar. Criticise FIFA, criticise me. But let people enjoy this World Cup."

On FIFA uniting the world

"We are a global organisation, and we want to remain an organisation that unites the world. I am still convinced, though not sure how optimistic I still am, that this World Cup will help to open the eyes of people in the western world to the Arab world. We have to live together, but we have to understand we have different beliefs, different history and backgrounds, but we are in the same world.

"It's why you have to come here and say what you see – when you see something that is wrong, say how it can be rectified, please. So maybe, we can help everyone to understand how we can help each other a little bit better."

On Iran's place in the tournament

"Because it's not two regimes playing each other, not two ideologies, it's two football teams. It's football. If we don't have football to bring us together… You want another World War? Okay, go ahead, without me. We have to bring people together.

"In Iran there are 80 million people living. Do you think they are all bad? All monsters? I don't think so. Do we have to exclude everyone because not everyone is good or says the right thing? We'll fight and fight to bring people together, and the more we can do that, the better it will be because no one else is doing that."