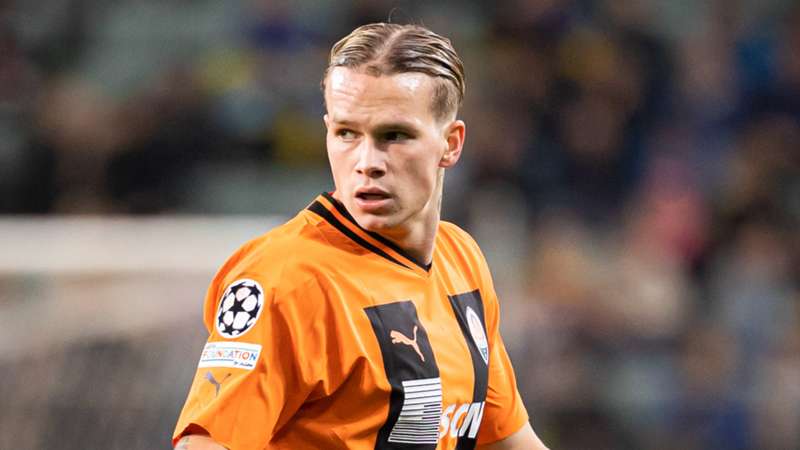 Any club looking to snatch Mykhaylo Mudryk will have to splash at least €100million, Shakhtar Donetsk's director of football Dario Srna has said.

The Ukraine international has courted the attention of Europe's elite with spectacular performances in the Champions League, where he scored three goals and contributed two assists in six appearances.

Earlier this week, Mudryk revealed he follows Arsenal closely, amid continued speculation the Premier League leaders are looking to launch a move for his services when the market reopens in the new year.

Mudryk's services will not come cheaply, though, with Srna arguing the transfers of Antony and Jadon Sancho to Manchester United, and Jack Grealish to Manchester City, have set the bar.

"If somebody wants to buy Mudryk, they must pay huge, huge, huge money. Otherwise, the president of the club (Rinat Akhmetov) will not sell him," he told The Athletic.

"All the clubs must respect the president, respect Shakhtar and in the end they must respect Mykhaylo Mudryk, who is one of the best players I have seen. The price is so big.

5th goal by the midfielder in championship this season #ShakhtarVeres #Shakhtar pic.twitter.com/0cQyarI13i

"The market is deciding the price, not me. Antony, Grealish, they are players of more than €100m and for me, Mudryk does not have less quality than them.

"This is the last two transfers in the past year, in more or less the same positions. Sancho from Borussia Dortmund also. We just want respect. The market is deciding the price, not me – it shows which kind of players cost this kind of money."

"Every week, some club appears and starts to feel [where we are]. They're not coming and saying 'OK, take 50 million and give me Mudryk'. They understand the story behind him, and they understand that he is quite an expensive player," Palkin explained.

"But they start to feel our club, what our strategy is, what we should do. In any case, the time will arrive. Definitely, it will arrive and a big club will give us €100m.

"Mudryk is a talent in a process. What he is showing today, it’s just 60 per cent of what he can do in the future. And when you multiply this, you realise he costs much, much more. Therefore, we believe that in the future he can cost definitely around €100m."