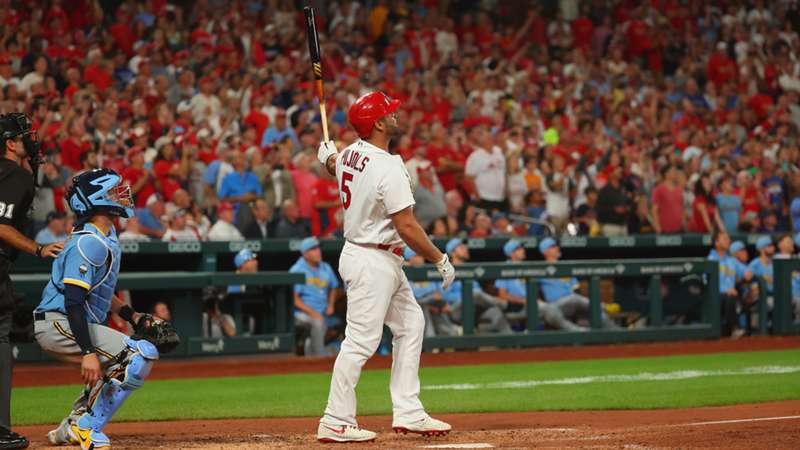 Albert Pujols was the star of the show on Friday night as he moved one step closer to becoming the fourth player to ever hit 700 home runs, connecting on number 698 in the St Louis Cardinals' 6-5 win against the Cincinnati Reds.

The stars delivered for the Cardinals to rally back from the deficit, with NL MVP favourite Paul Goldschmidt leading off the inning with a double, before fellow NL MVP candidate Nolan Arenado drove him home with a single, bringing Pujols to the plate.

On the very first pitch, Pujols crushed a no-doubt home run sailing well over the left-field wall to tie things up, with his 427-foot shot travelling further than any ball he hit at this year's Home Run Derby, and leaving him with two required to reach 700. Only Barry Bonds (762), Hank Aaron (755) and Babe Ruth (714) have hit more.

Kyle Farmer put the Reds back ahead with his own solo home run in the seventh inning, but later in that inning Goldschmidt and Arenado would combine again, with back-to-back doubles scoring a pair of runs to take a 6-5 lead.

Cardinals closer Ryan Helsley came in to finish the job, and he did it in style, striking out all three batters from only nine pitches for a rare immaculate inning. It was only the third immaculate inning in Cardinals history.

Yordan Alvarez was in rare form for the Houston Astros in their 5-0 shut-out win against the Oakland Athletics, hitting home runs in each of his first three at-bats to deliver a win in Justin Verlander's return from injury.

The AL Cy Young Award favourite made his way back from the 15-day injured list to throw five hitless innings, striking out nine batters and only allowing one walk.

Helping him out with the bat, Alvarez hit a 434-foot home run in the first inning, followed by a 431-foot shot in the third inning, and from the first pitch of his third at-bat he did it again, blasting the longest ball of the night with a 464-foot nuke to center-field.

With his three homers, Alvarez is now tied for the third most in the majors with 36, although he remains 21 behind league-leader Aaron Judge (57).

The New York Yankees led 5-0 in the second inning against the Milwaukee Brewers before going down 7-6 on a walk-off hit from Garrett Mitchell.

After the Yankees jumped out to their big early lead, Willy Adames pegged back four of the runs by himself, with a three-run homer in the second inning and an RBI double in the fourth.

A fielding error in the eighth inning allowed the Brewers to take a 6-5 lead, before Josh Donaldson collected his third RBI of the game with a solo home run to tie things in the last frame.

But Yankees closer Clay Holmes could not force extra innings, giving up two hits and two walks, capped off by Mitchell's game-winning single.