The Rugby Championship: The Breakdown – Springboks hoping for Australia favour against New Zealand The final round of Rugby Championship fixtures are upon us and two teams are realistically left standing in the battle to be crowned 2022 champions.

New Zealand are level with South Africa at the summit, but they have the advantage in terms of the sides' net points difference, which may be used as a deciding factor.

The All Blacks therefore know a bonus-point win over Bledisloe Cup rivals Australia in a repeat of last week's classic will all but land them an eighth title in 10 years.

South Africa play Argentina, the only side entirely out of the running, later on Saturday and will know what they have to do to have a chance – if any – of overtaking New Zealand.

Here, Stats Perform previews the weekend clashes in round six of the championship using Opta data.

New Zealand beat Australia 39-37 in last week's thrilling Test in Melbourne through a hugely contentious late try to make it four wins in a row in this fixture – their best such run since winning seven on the bounce between August 2015 and August 2017.

The All Blacks' record on home soil against Australia is even better, having won each of the last 22 Tests in Auckland by an average margin of 18 points per game. The last time Australia got the better of their neighbours in that city was in September 1986.

Australia therefore have a huge task on their hands at Eden Park as they aim to avoid losing three Tests in a row in the Rugby Championship for the first time since September 2013, with this current run following a streak of six wins from their previous seven matches in the competition.

The Wallabies, who need a bonus-point win and would then hope South Africa fail to get the result required against Argentina, will look to exploit any ill-discipline from their rivals. Their goal-kicking accuracy of 92 per cent on place-kicks this year (33/36) is some 11 percentage points higher than any other Tier One nation.

Will Jordan has made 10 line breaks for New Zealand across 2022, which is the most of any player from a Tier One nation. To put that into some further perspective, it is double the tally of Tom Wright (five), Australia's best performer in that area.

Australia wing Marika Koroibete could hold the key to breaking down the hosts. The 30-year-old has beaten 23 defenders in 2022 – the most of any player from a Tier One nation and two more than New Zealand's best Rieko Ioane. 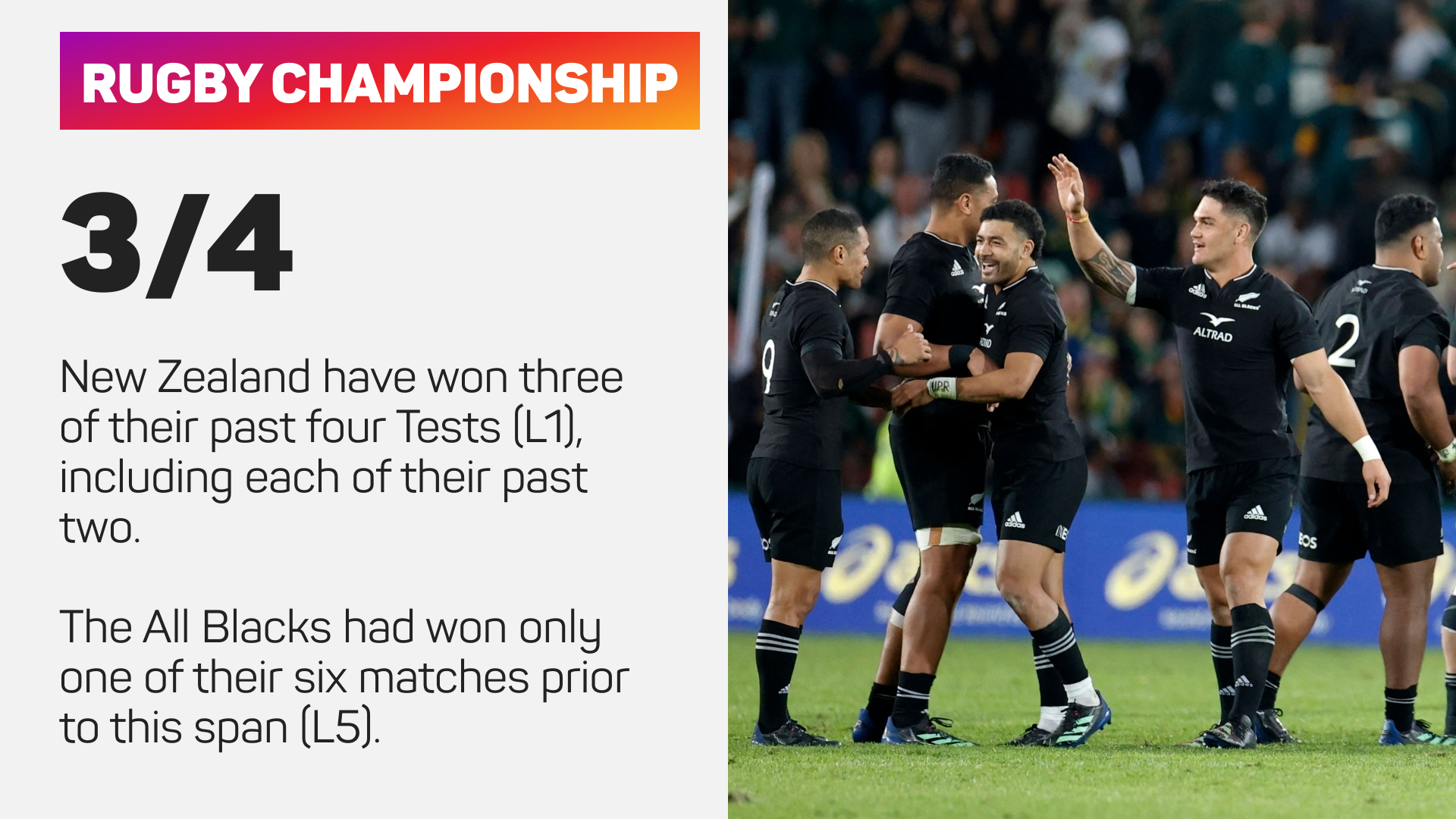 Following last week's 36-20 bonus-point triumph in Buenos Aires, South Africa have won their past five Tests against Argentina. However, a win alone may not be enough on Saturday and the Springboks could find themselves going all out for an emphatic victory in pursuit of New Zealand.

The Boks have some much-needed momentum on their side thanks to two wins in a row – matching the number they managed in their previous seven games in the competition – with those victories coming by a margin of exactly 16 points.

Argentina cannot be written off, though, having already defeated New Zealand and Australia during the first half of their championship campaign. Los Pumas have lost back-to-back matches since then, as many as they lost in their six games prior.

Turnovers could be a huge factor in this contest as Argentina and South Africa have won the most of any teams in this year's tournament with 22 apiece, while also making the most and second-most tackles with 706 and 600 respectively.

Springbok lock Lood de Jager has played a big part for his country this campaign and is second only to Italy's Federico Ruzza for line-outs won among players from Tier One nations in 2022 with 36.

Matias Moroni was among the try scorers for Argentina in last week's loss when finishing off a well-worked set-piece and is among the starters for this latest tussle. He has made dominant contact on seven tackles this year, placing him second only to Italy's Monty Ioane (eight) among elite nations.