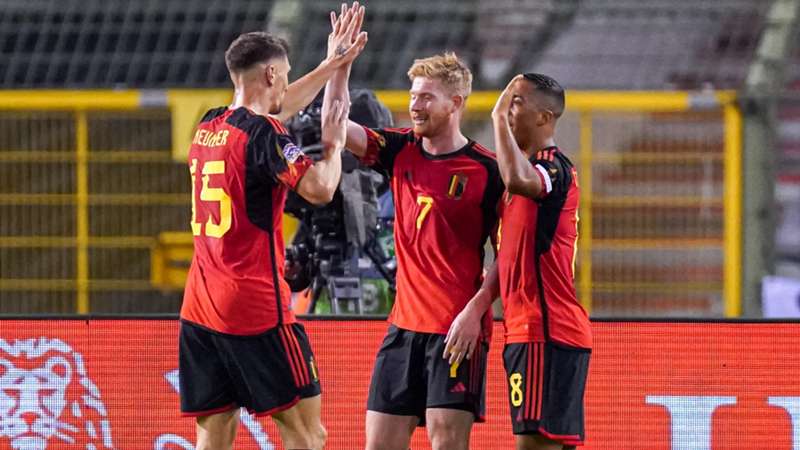 Kevin De Bruyne was on target as Belgium kept their faint hopes of progressing to the Nations League Finals alive with a 2-1 victory over Wales.

Kieffer Moore pulled one back for Wales, but the Dragons must now beat Poland on Sunday to have any chance of avoiding relegation from League A.

The Red Devils, whose head coach Roberto Martinez was sent from the touchline for time-wasting, need an emphatic win over the Dutch when they meet on Sunday to reach the Finals.

Belgium took just 10 minutes to break through as De Bruyne applied a wonderful first-time finish to Batshuayi's lay-off to the edge of the penalty area.

Youri Tielemans steered Yannick Carrasco's cross off target and Batshuayi fired over from a tight angle as the Red Devils continued to dominate, while the woodwork denied De Bruyne a second goal as he rattled the post from 20 yards out.

Eden Hazard then curled narrowly wide before the hosts doubled their lead in the 37th minute. This time, De Bruyne was the provider; sweeping in a pinpoint cross for Batshuayi to touch home.

Ethan Ampadu called Thibaut Courtois into action with Wales' first attempt on goal, while Wayne Hennessey denied De Bruyne at the other end.

The visitors halved the deficit within five minutes of the restart as Moore rose to head home Brennan Johnson's inviting cross.

VAR overturned a Belgian penalty later on, but the hosts held on for maximum points after Martinez was ordered from the touchline in stoppage time.