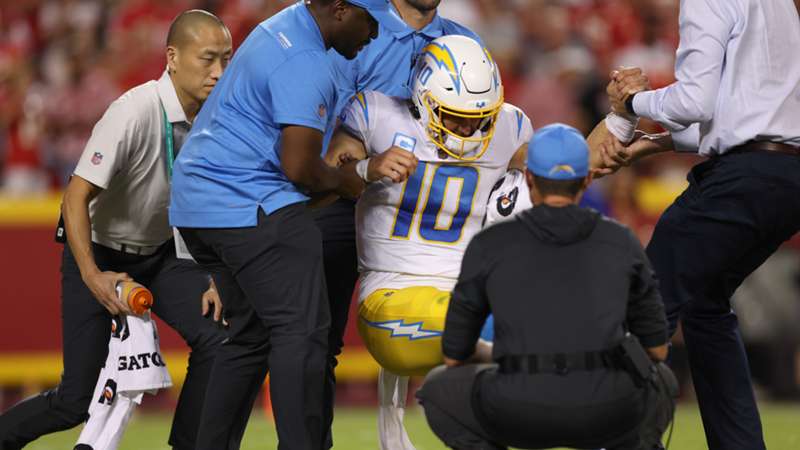 Los Angeles Chargers quarterback Justin Herbert has been diagnosed with a rib cartilage fracture after getting injured in the fourth quarter of his team’s loss at Kansas City on Thursday night.

"I think we got good news in terms of what the CT scan expressed," Staley said. "I think playing quarterback, you don’t want it to be the bones. The fact that it’s cartilage is a good sign.

"It’s just going to come down to comfort. We’re just gonna have to make sure that he’s comfortable. We’re not going to know more about how he feels until later on in the week."

Herbert was injured on a hit from Chiefs defensive end Mike Danna with about five minutes remaining in the Chargers’ 27-24 loss. The 2020 NFL Offensive Rookie of the Year left the field for one play before returning, and threw his third touchdown pass of the night on Los Angeles’ ensuing and final drive to lead a rally attempt that fell just short.

The third-year pro finished with 334 passing yards while completing 33 of 48 attempts with one interception, which Kansas City’s Jaylen Watson returned 99 yards for a pivotal touchdown earlier in the fourth quarter.

"You’re not going to see a quarterback at any level of football play tougher and do more for their team and will their team to give them a chance more than him," Staley said after the game. "He showed a lot of guts.

"He showed us what he shows every day, that we’re never out of the fight, and he brought us back and gave us a chance."

Veteran Chase Daniel would start against the Jaguars should Herbert require more time to heal. The well-traveled 35-year-old has made five career starts in 13 NFL seasons, most recently with the Chicago Bears in 2019.