'He has delivered, he needed this goal' - Ancelotti salutes Asensio strike in Leipzig win 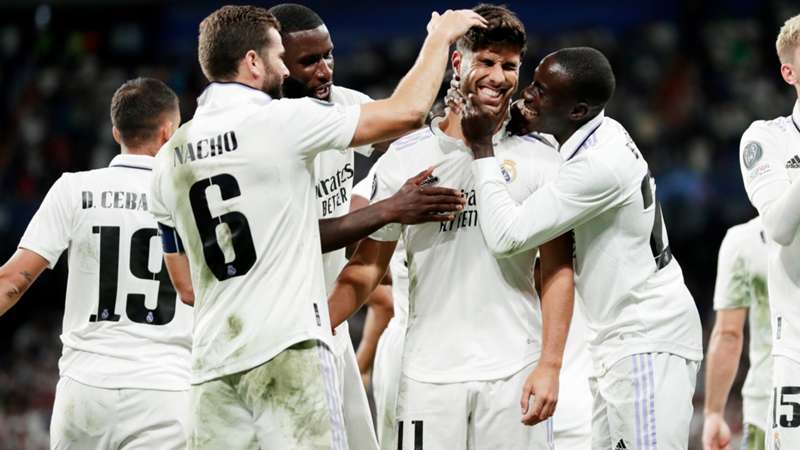 Carlo Ancelotti saluted the impact of substitute Marco Asensio following his goal in Real Madrid's 2-0 win over RB Leipzig in the Champions League.

After Federico Valverde opened the scoring, Asensio sealed the victory by sweeping a wonderful first-time effort into the top corner from Toni Kroos' lay-off for his eighth Champions League goal as a substitute - now the most of any player in the history of the competition.

The winger, who replaced Eduardo Camavinga in the 64th minute, was repeatedly linked with a move away from Madrid during the transfer window, and entered the contest having played just 17 minutes for Los Blancos across all competitions this season.

His frustration at the lack of playing time boiled over when he was overlooked by Ancelotti during Sunday's 4-1 win over Mallorca; throwing his bib to the ground while kicking a water bottle. But the Italian was pleased by Asensio's response.

"[I am] happy, he has had minutes and has delivered. I think he needed this goal," said Ancelotti, who became only the second coach to record 100 Champions League wins after Alex Ferguson (102).

"At first, he hesitated whether to leave or stay, but he has stayed, and we were all happy. [It was a] good game, although we suffered a bit in the first half.

"The most important thing was to prevent them from having space behind the defenders, and that's why we wanted a slow pace. At half-time, we decided to put more energy into the game."

Madrid have now recorded clean sheets in each of their last three matches in the competition; doing so for the first time since the 2015-16 season.

And goalkeeper Thibaut Courtois highlighted the significance of making a strong start in Group F, with a double-header against Shakhtar Donetsk to come.

"It was important to start our defence with two straight wins," he said. "Now, if we can win our two against Shakhtar, we'll be nearly through to the next round.

"Maybe when we played better, we still didn't make huge danger [today], but the key was that we took our chances.

"We applied much better pressure in the second half. We marked our men, played the ball simply when we had it. Our general play needs to improve - too many times, we failed to make our passes."