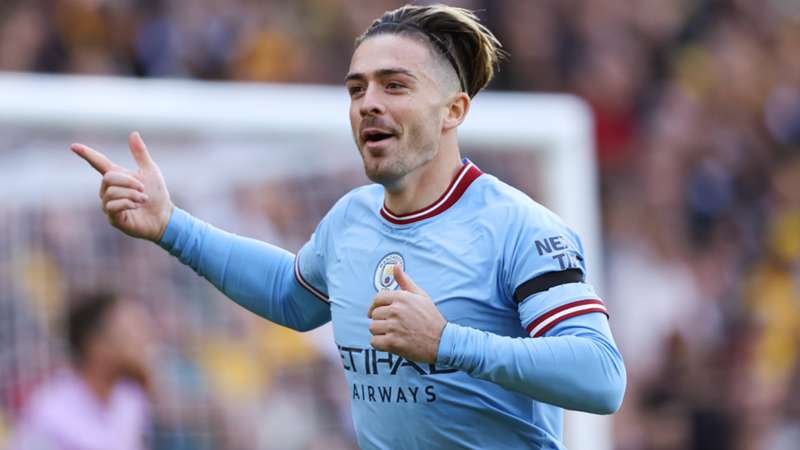 Jack Grealish thanked Pep Guardiola after scoring his first goal of the season in Manchester City's 3-0 win at Wolves, admitting critics were right to question his output.

Grealish, who netted six times during his maiden season at City after moving from Aston Villa for £100million, was substituted in the 58th minute of the Champions League victory over Borussia Dortmund in midweek.

He was grateful to be thrown in from the start once more, netting his first goal since a 2-2 draw with West Ham in May, and hopes to continue to repay Guardiola's faith.

"It was a long time coming and nice to get off the mark," Grealish told BT Sport. "Rightly so, people have been asking questions, I should be scoring more and getting more assists.

"I am always going to have people talking about me with the money that was spent on me, but all my career I haven't scored enough goals. I do want to add that to my game.

"It is nice when Pep defends me. He has been brilliant with me. I probably have to thank him because he gave me the opportunity today after my performance on Wednesday because it probably wasn't the best. I am thankful to him."

Erling Haaland doubled City's lead before Wolves had Nathan Collins sent off in the 33rd minute. A strike from Phil Foden midway through the second half made sure of the points for the visitors.

Guardiola saluted "an incredible victory" for his side as they moved top of the Premier League table, with Arsenal not playing Brentford until Sunday, and he also praised Grealish's performance.

"The game started really well for us with the two goals and the red card," the City manager said. "After the Champions League, to come here with the quality they have – they can keep the ball and transitions are fast – it was an incredible victory.

"We struggled a lot after half-time until Phil's goal, so a lot of credit to Wolves.

"Jack played really good. He was strong and he made a good goal coming in. Hopefully, he can make a good international performance and come back fit."

The international break means Guardiola will see many of his players, such as Grealish, join up with their countries in the coming week, with City back in action when they face Manchester United on October 2.

"Fingers crossed, all the players come back fit," Guardiola said. "It is important for them ahead of the World Cup, but hopefully they come back good, ready for the derby."