Jets QB Wilson back at practice, Flacco to remain starter vs. Browns 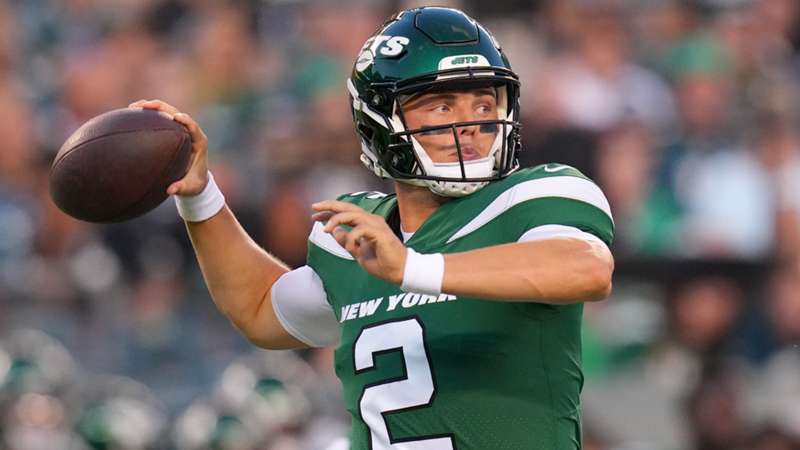 New York Jets quarterback Zach Wilson returned to the practice field on Wednesday for the first time since undergoing surgery to repair a torn meniscus in his right knee last month.

Flacco threw for 309 yards in last week's season opener, though the Jets' offense struggled as a whole in a 24-9 home loss to the Baltimore Ravens. The veteran completed 37 of 59 attempts with one interception and one touchdown, a three-yard strike to tight end Tyler Conklin in the game's final minute with the outcome already decided.

Though he admitted Flacco’s performance left room for improvement, Saleh attributed the offense's ineffectiveness to several other factors beyond the quarterback’s control. Jets receivers dropped four passes on the day and there were notable protection issues as Flacco was sacked three times and took nine knockdowns.

"There was a comedy of errors that just led to what looked like a bad performance by [Flacco]," Saleh said. "Now, it wasn't his best performance, but I don't think it was as bad as people think.

"When you look back at the game, when he had a clean pocket, he was very, very efficient. Part of the clean pocket is the offensive line's responsibility to give it to him and for him to just deliver the ball where it needs to and get off of certain reads."

Flacco has now lost all six of his starts with the Jets over the past three seasons, and last week's showing had fans at MetLife Stadium calling for the former Super Bowl MVP to be replaced by backup Mike White throughout the second half.

White made three starts in place of an injured Wilson last season and won the first by throwing for 405 yards and three touchdowns against the eventual AFC champion Cincinnati Bengals. The 27-year-old had a combined 346 passing yards and four interceptions in losing the other two, however, and opened camp as the Jets' No. 3 quarterback until Wilson's latest injury.