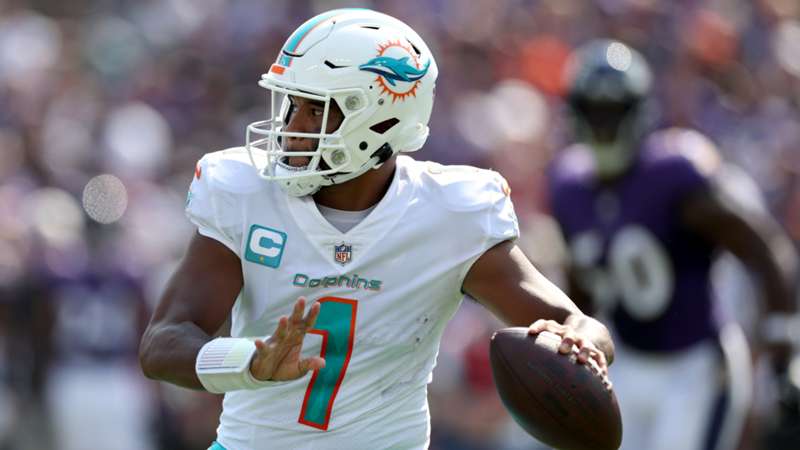 Since entering the NFL in 2020, Tua Tagovailoa has had more doubters than believers.

A rookie year in which he rotated with Ryan Fitzpatrick and a surge in the second half of last season fuelled largely by the Dolphins' reliance on the run-pass option did little to dissuade the sceptics, with plenty still questioning his ability to be the long-term answer at quarterback for a franchise that has not had one since Dan Marino rode off into the sunset.

Those doubts evidently existed within the Dolphins' organisation, one which was reportedly very interested in striking a trade for Deshaun Watson last year.

But two games into an undefeated start to a make-or-break year for Tagovailoa it is clear he has the belief of the most important person in the building – his head coach.

And on Sunday, as the Dolphins remarkably stormed back from a 35-14 fourth-quarter deficit to stun the Baltimore Ravens 42-38 on the road, Mike McDaniel's faith in one of the most scrutinised quarterbacks in the NFL enabled Tagovailoa to deliver one of the most incredible results in recent league history. 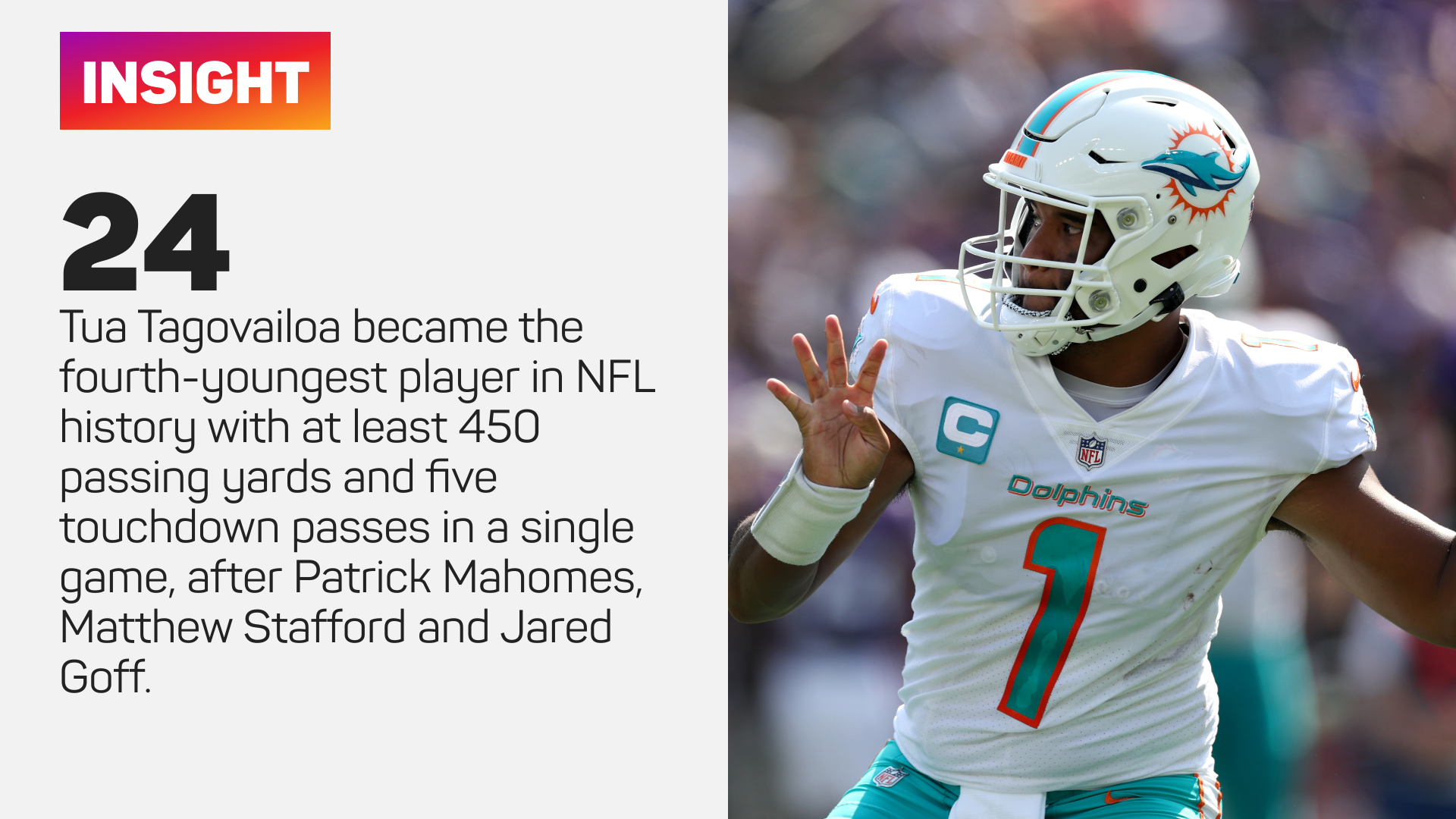 The Dolphins became the first team to overcome a 21-point fourth-quarter deficit since the Philadelphia Eagles achieved that feat in Week 15 of the 2010 season against the New York Giants.

For those who aren't familiar with that game, it required a 65-yard punt return from Desean Jackson as time expired for the Eagles to complete the comeback and became known as the Miracle at the New Meadowlands. That's how unlikely such turnarounds are.

Yet McDaniel instilled calm in the Dolphins as they went into the second half trailing 28-7, and his relaxed approach and his belief in his quarterback yielded astonishing dividends.

"I just challenged them to say 'who cares what the score is?' It's about how we play football together, so this is an opportunity, it's a tough one but that doesn't even matter, let's get something out of this game to feel good about in the second half and we'll worry about the score some time in the fourth quarter," McDaniel said.

"I didn't care about the outcome of the game at that point, at half-time it was a huge opportunity for us to show who we are and play good football for each other."

In regards to Tagovailoa, McDaniel was delighted he succeeded in getting his quarterback to play with a short memory in a game where he threw two interceptions in the first half.

"Now maybe Tua will finally listen to me," added McDaniel. "It's awesome to be critical of yourself, it's good. He has a high standard for himself. After the first game I just wanted to see the guy enjoy playing football, and understand that yes 'you want to make the perfect read and the perfect throw every time, but who cares?'

"If you just get better at one thing a game you're going to be pretty good at the end of the season. So let's just press forward.

"The absolute worst thing could have happened for him at the beginning of the game [on the first interception], where we get a contested ball, that's not really his fault, and then he starts pressing and throws it up for a second interception.

"This is huge because he stopped worrying about the last play and he went and played and took his responsibility seriously to his team-mates about 'hey I'm going to lead this team confidently'.

"It is what you get into sports for. I think it was a moment that he'll never forget, that hopefully he can use moving forward because we basically had to play perfect complementary football to come back from a deficit like that against a really good team. His team-mates learned a lot about him and I think he learned something about himself."

That short memory allowed Tagovailoa to complete 36 of his 50 pass attempts for a career-high 469 yards and six touchdowns. The only other two Dolphin quarterbacks to throw six touchdowns in a game are Marino and Bob Griese.

And, with two of those scores coming on deep shots 48 and 60 yards to Tyreek Hill, Tagovailoa may feel he has gone some way to quieting a narrative that has persisted throughout the build-up to this campaign.

The offseason in Miami was defined in part by questions about Tagovailoa's ability to throw the deep ball. Last season, he had one completion of 20 yards or more for a touchdown. Through two games in 2022, he has three.

In addition to producing an immediate improvement on where he was last year in completing passes downfield, Tagovailoa also made strides from his performance in the opening week of the season against the New England Patriots.

Week 1 saw Tagovailoa deliver an accurate, well-thrown ball on 71.9 per cent of his passes, according to Stats Perform data. Against the Ravens, his well-thrown rate was up to 80 per cent.

Tagovailoa's performance saw him enter the NFL record books as the third-youngest player with six touchdown passes in a single game and the fourth-youngest with at least 450 passing yards and five touchdowns in the same game at the age of 24 years and 200 days.

His success came in part through heeding the words of his coach and getting significantly better in one area than he was in the previous week, but his career day was not simply the product of better accuracy and motivation from McDaniel.

Indeed, it was also a result of having two receivers with the speed to terrify any defense and a play-caller who knows how to deploy them and set his team up for success, as well as two massive coverage mix-ups by Baltimore that allowed Hill to tie the game with two deep receptions.

While he only produced a burn – which is when a receiver wins his matchup with a defender on a play where he is targeted – on seven of his 13 targets (a ratio of 53.8 per cent that was below the average of 58.7 for the week as of Monday), only five receivers targeted at least five times in Week 2 averaged more burn yards per target than Hill's 14.62.

With fellow speedster Jaylen Waddle winning 13 of his 19 matchups for an impressive burn rate of 68.4, Tagovailoa was targeting two pass-catchers adept at creating separation who presented the perfect duo with which to attack a Ravens secondary battling injuries, Hill and Waddle becoming the first pair of team-mates in NFL history to record at least 10 receptions, 150 receiving yards and two touchdown receptions in the same game.

And McDaniel made the most telling illustration of his impact on the final drive. Schooled in the Kyle Shanahan offense, the first-year head coach showed the value of his long apprenticeship under the league's pre-eminent play-caller on two game-deciding calls.

The first was his call for a split-zone run with Chase Edmonds on second-and-one from the Ravens' 35-yard line with 46 seconds left.

It is a situation where most would have expected another shot at big passing play. Instead, McDaniel created an explosive move with the run, using the snap motion to take the nickel defender at the second level over to the far side of the field, before safety Chuck Clark, playing down in the box, reacted to tight end Mike Gesicki peeling back across the formation to block linebacker Patrick Queen by following him away from the direction of the play, his vacation of his previous alignment and well-executed blocking by Miami creating a huge hole for Edmonds to rumble 28 yards to the seven-yard line.

Two plays later, McDaniel again used motion to help the Dolphins complete the comeback, this time with Waddle going across the field and being followed in man coverage by former Alabama team-mate Jalyn Armour-Davis. At the snap, Trent Sherfield ran a slant that essentially served as a pick play, the collision between Armour-Davis and Daryl Worley leaving the former out of position for long enough for Waddle to create separation with his pivot route and allowing Tagovailoa, having superbly navigated the pocket, to find him with a high throw on the move.

At Alabama, Tagovailoa was playing for college football's powerhouse, a program that serves as a ceaseless production line of NFL talent and the perfect incubator in which a young quarterback can thrive at that level.

In other words, he was in the ideal situation. Across his first two seasons in Miami, he was in anything but.

As the hugely improbable fightback against the Ravens demonstrated, Tagovailoa – with two game-breakers at receiver and a head coach with the mindset and the play-calling acumen to accentuate the strengths of his quarterback and his surrounding talent – is in a substantially better spot.

McDaniel, Tagovailoa and Co. combined to achieve the near-impossible and, after a fourth-quarter turnaround for ages, the quarterback whom so many were willing to write off should be the subject of burgeoning belief.