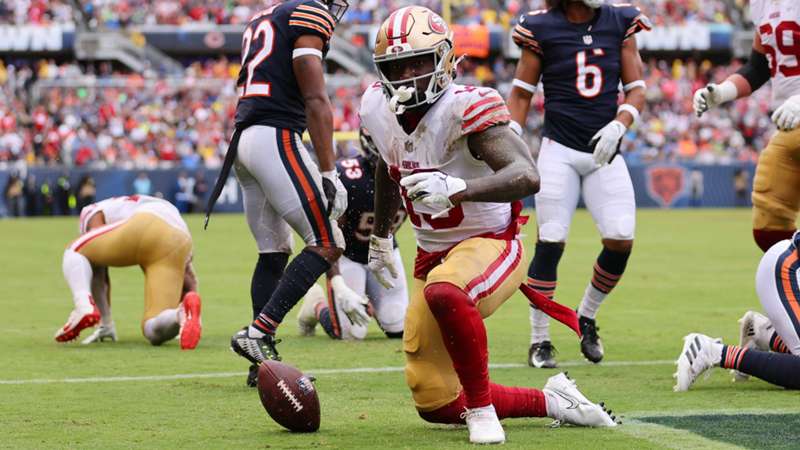 Week 1 didn't go to plan for a host of NFL teams expected to contend to go deep into the postseason.

But in many cases, Week 1 is not indicative of how a team's season will pan out, with the opener often seen almost as an extension of the preseason.

There is plenty of time for teams to get back on track, especially following the advent of the 17-game season, and the four players and a defense selected as this week's fantasy picks all come from teams who will be looking to bounce back from defeat in Week 1 on Sunday.

Is it time to worry about Stafford after his and the Rams' opening night shocker against the Buffalo Bills?

Probably not, but it may well be if those struggles are repeated against the Falcons.

The Falcons allowed the ninth-most yards per play in the NFL last season and conceded 16 fourth-quarter points in their collapse versus the New Orleans Saints last week.

Stafford should have no problems exploiting their defense and rebounding in style with a performance to delight fantasy owners.

Mixon struggled to get going against the Pittsburgh Steelers in the Bengals' remarkable overtime loss last week. He should not have the same difficulty against the Cowboys, who were gashed for six yards a carry by Leonard Fournette of the Tampa Bay Buccaneers in Week 1.

With Mixon also making seven catches and winning his matchup with a defender on six of his nine targets against Pittsburgh, according to Stats Perform data, he should also be in line for plenty of touches through the air as Joe Burrow and the Bengals look to frustrate a Dallas pass rush that should have plenty of success against their offensive line.

Mixon likely won't come close to the 34 touches he had last week, but he will still be heavily involved and will be expected to have much more success on the touches he does receive against a defense that showed scant resistance to the ground game in its opener.

With the 49ers' starting running back, Elijah Mitchell, going down with a knee injury in Week 1, the lion's share of the carries in the backfield are up for grabs.

Chances are they won't go to Mitchell's backups in the running back room, but to Samuel, San Francisco's 'wide back'.

The versatile wide receiver was the heartbeat of the 49er offense down the stretch in their run to the NFC Championship Game last season and had eight carries for 52 yards and a touchdown in San Francisco's surprise Week 1 loss to the Chicago Bears.

With Mitchell on the sideline, Samuel should see a much larger workload against a Seahawks defense that surrendered 5.2 yards per rush on Monday against the Denver Broncos.

Through the air last season, Samuel racked up 156 yards and two touchdowns in his lone game against the Seahawks. With the prospect of additional running back work on top of his receiving targets, Samuel could be the difference for the Niners and for scores of fantasy players in Week 2.

After giving up 121 yards and a touchdown to Travis Kelce in their blowout loss to the Kansas City Chiefs, the Cardinals draw another of the game's top tight ends in Week 2.

Waller was held to 79 yards receiving in the Raiders' loss to the Los Angeles Chargers but won his matchup with his defender on five of his six targets.

Look for Waller to emulate Kelce in taking advantage of a Cardinals back seven seemingly ill-prepared for the challenge of facing an elite tight end and putting a together an impressive statistical performance.

It may be easy to be concerned about the Packers after their opening 23-7 loss to the Minnesota Vikings, but such worries are likely to alleviated against the Bears.

Even with Justin Jefferson exploding for 184 receiving yards and two touchdowns, the Packers' defense still produced what should have been a winning effort in Week 1.

Green Bay gave up fewer first downs than Minnesota and held the Vikings to 4-13 on third down, but the Packers' defense received little support from the offense.

That will not be the case versus Chicago. The Bears stunned the 49ers in Week 1 with 19 unanswered points, but they turned the ball over twice while Justin Fields completed just eight passes. A Packers defense that has talent at every level should have similar success forcing Chicago into negative plays and generating fantasy points in a bounce-back win for Green Bay.

Rashford: United would have 'liked to play better' in Omonia
Read more ...