Despite an offseason of considerable change, the New Orleans Saints went into this season with plenty of supporters backing them for a return to prominence in the NFC.

Yet New Orleans had some tipping them not only to win the NFC South, but to go into the playoffs as the number one seed in the conference.

Such predictions did not raise eyebrows because of the quality of the Saints' roster – it remains one of the better all-round groups in the NFC – but because of the number of unknowns surrounding the Saints.

It is a mystery whether Allen will have what it takes to be a successful head coach and whether quarterback Jameis Winston, who saw a promising seven-game stretch ended by injury last year, can finally be a success at the highest level after years of failing to live up to his status as the top pick in the 2015 draft.

The Saints' 27-26 comeback win over the Atlanta Falcons in Week 1 was far from convincing, but it seemingly removed one key unknown from the equation as Michael Thomas enjoyed a superb return from injury.

One game, one in which the Saints needed a huge fourth-quarter comeback to avoid an upset, is not enough to definitively answer questions about coach or quarterback, though.

A much larger sample size will be needed to make an assessment of Allen, but Winston faces a litmus test of his credentials as the answer for the Saints when he goes against the team that drafted him, the Tampa Bay Buccaneers, in Week 2.

The Saints have won their last seven regular-season games against the Buccaneers, matching the longest winning streak by either team in this rivalry.

Winston was injured in a home win over the Bucs last year, and his ability to continue that run could provide a significant indication whether he is the man to help the Saints wrest the NFC South from Tom Brady's Buccaneers and put New Orleans on the path to one of the top seeds in the conference.

Winston displayed why the Saints were willing to keep the faith in him in the comeback against Atlanta, illustrating his upside as a downfield passer with six completions of 20 yards or more, which as of Friday were the fourth-most in the NFL.

He also displayed impressive accuracy, delivering a well-thrown, accurate ball on 87.1 per cent of his pass attempts, according to Stats Perform data. 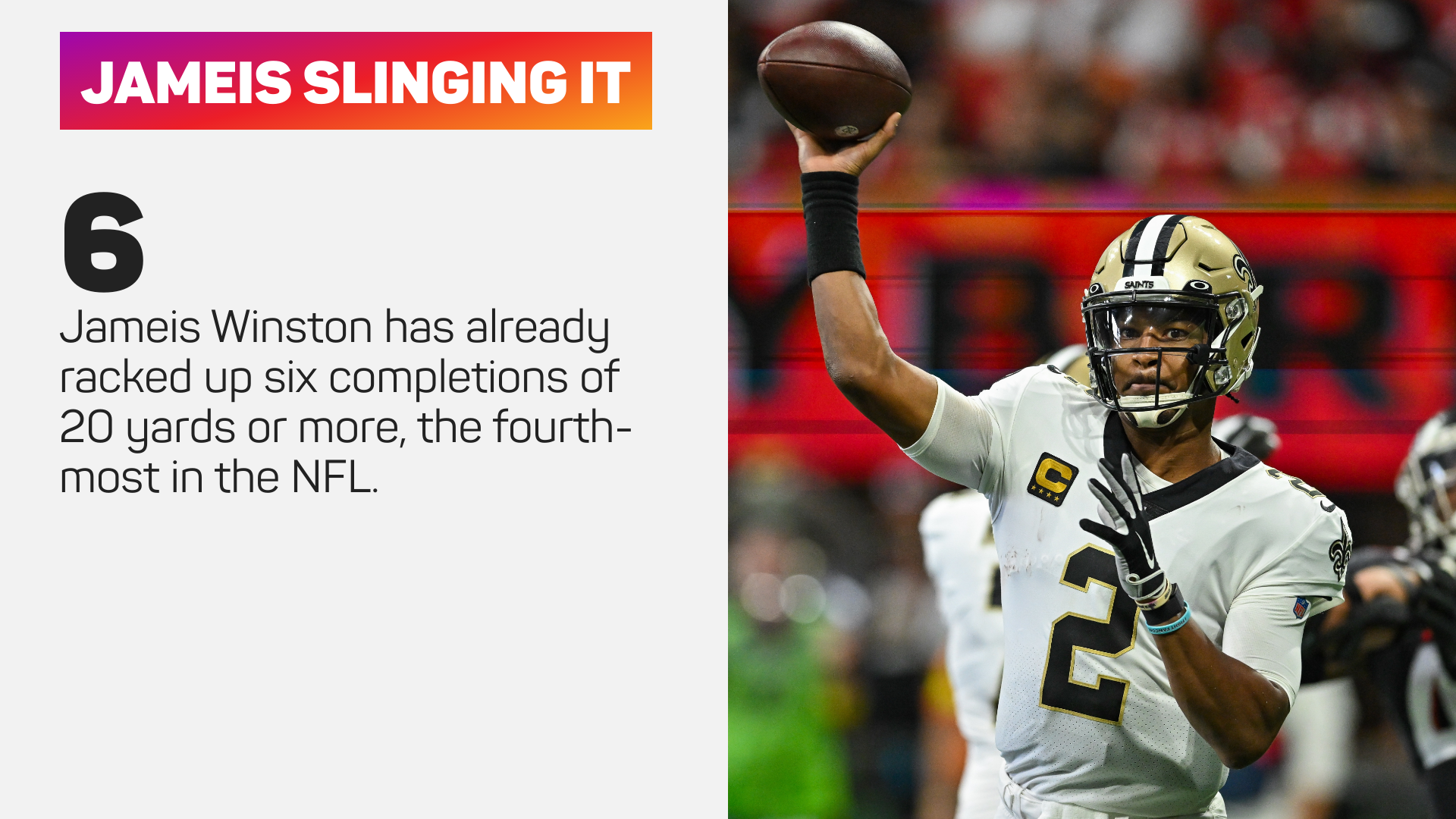 Winston having success pushing the ball deep is nothing new. His 154 passing plays of 25 yards or more since he entered the league are the 13th-most in the league in that span. Last season, he averaged 9.14 air yards per attempt.

Yet his performance in Week 1 represented a stark improvement in terms of accuracy over what he produced in 2021. Indeed, Winston's well-thrown rate of 75.7 per cent last season was below the league average of 77.9.

Winston also excelled in delivering the ball accurately under duress, with six of his seven pass attempts when pressured considered to be well-thrown.

Whether he maintains that level of play in the face of the Tampa Bay pass rush will reveal a lot about his chances of steering the Saints to a division title.

Holding on too long?

Winston was sacked four times against the Falcons. While on the surface that may appear an indictment of the Saints' offensive line, the reality is that, for the most part, New Orleans did a very impressive job in pass protection.

The Saints ended Week 1 ranked fourth in Stats Perform's pass protection win rate. Two of their sacks were a result of individual brilliance from Falcons defensive tackle Grady Jarrett, while one was an effort sack from rookie Arnold Ebiketie and another came on a delayed blitz from the second level by Mykal Walker.

The theme across those plays where the Saints quarterback was brought down in the backfield was clear – Winston holding the ball for over three seconds.

On his seven attempts that came under pressure, Winston held the ball from snap to release for an average of 3.15 seconds.

Against a Tampa Bay defense that registered the seventh-most sacks for negative yardage (45) in the NFL last season and had no shortage of success against Dak Prescott and the Dallas Cowboys in Week 1, Winston is unlikely to get away with hanging onto the ball for so long.

Winston's length of time holding the ball is in part connected to his aggressiveness in targeting receivers on deep routes, and he and the Saints will need the offensive line, which lost the services of three-time Pro Bowler Terron Armstead in the offseason, to hold up to facilitate those downfield shots in Week 2.

However, if it does not, Winston will need to efficiently read the field and get the ball out quickly to prevent the Saints' offense from being sunk by a fearsome Tampa Bay defense. Fail to do so, and it may be difficult to take New Orleans seriously as legitimate contenders. Thankfully for Winston, he has weapons who can offer him the safety nets he needs to frustrate opposing pass rushes with the quick game.

Having played only seven games across the last two seasons, there were substantial doubts over Thomas' ability to return and perform at the level that saw him set the NFL record for receptions in a season (194) in 2019.

Thomas emphatically answered his doubters with a two-touchdown display, his second score coming on a stunning back shoulder catch that cut the Falcons' lead to two points late in the fourth quarter.

Among wide receivers with at least five targets in Week 1, Thomas was fourth with a big-play rate of 52.9 per cent.

Between Thomas, Jarvis Landry – who went for 114 yards on his Saints debut – and rookie Chris Olave, the first-round pick who caught three passes for 41 yards, the Saints have three receivers who can all create the separation to give Winston easy answers against pressure.

.@Cantguardmike living up to his handle - another TD!

Running back Alvin Kamara had little influence as a pass-catcher in Week 1, but a receiving big-play rate of 21.3 per cent that was fifth among running backs (min. 100 carries) in 2021 is indicative of just how dangerous he can be when he is a featured part of the passing game.

There is no doubt Winston has the offensive talent around him to succeed and he proved what he can do when he harnesses that talent in Week 1, becoming the first Saints player to throw for 200 or more passing yards in the fourth-quarter since 2008 as they won a game after trailing by at least 16 points in the final period for the first time.

He also has the support of defense that last year recorded one of only three shutouts of a Brady team in his 317 regular-season and 47 postseason starts.

Sitting 11th in Efficiency Versus Expected (EVE), which measures yardage gained in expected passing situations against the predicted yardage in those same scenarios, Winston made an encouraging start to what he hopes will be his first full season as the Saints' starter.

But the fact he was required to produce a late comeback against one of the NFL's least-talented teams speaks to an inconsistent offensive performance.

Volatility defined Winston's career in Tampa, but New Orleans will be substantially easier to trust as contenders if he can maintain his level while facing the quarterback who embodies consistency more than any other and help the Saints continue their hoodoo over the Bucs.