NFL Talking Point: Is there a true frontrunner in the NFC? 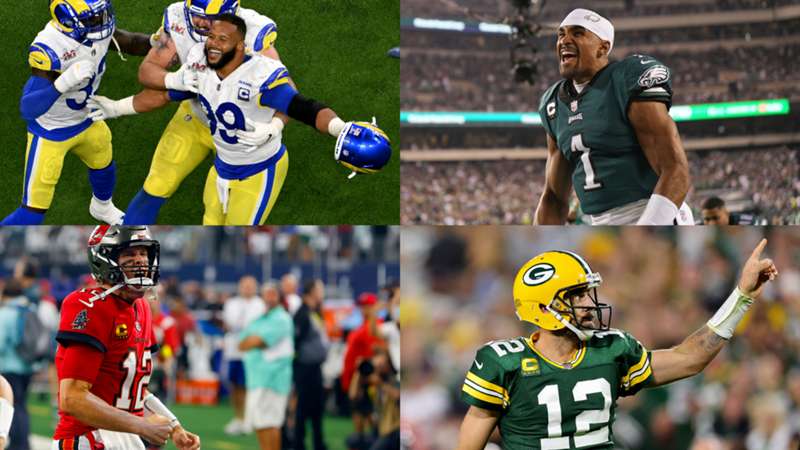 Is two games enough of a sample size to glean pertinent information about an NFL team's prospects? Probably not.

But one thing nobody -- not even the loudest talking head -- can say for certain is that they know who the frontrunner is in the NFC.

In the AFC, plenty are already falling over themselves to crown the Buffalo Bills. An extremely compelling case can be made for the Chiefs and maybe even the Los Angeles Chargers if they can keep Justin Herbert from further injury.

The NFC, though? That's an extremely tough conference to decipher at this early stage.

That is not to say there aren't standout teams. To the contrary, there are six that look to have an excellent shot of representing the NFC in the Super Bowl as they all reside in the top 10 of Stats Perform's power rankings.

Two of them will face off at Raymond James Stadium on Sunday when the Tampa Bay Buccaneers host the Green Bay Packers in what could be the final meeting between Tom Brady and Aaron Rodgers, who met in the NFC Championship Game two seasons ago. The Super Bowl-champion Los Angeles Rams will visit the San Francisco 49ers in a rematch of last year's title game in Week 4.

But which of that group has the best shot? Stats Perform has used its advanced data to examine the case for each of the six.

The Eagles have firmly lived up to their offseason hype so far, with Jalen Hurts piloting an efficient offense that is the most explosive in the NFL through two weeks.

Indeed, the Eagles are fourth in yards per play on offense while, prior to Thursday's game between the Pittsburgh Steelers and Cleveland Browns, no team in the NFL had produced more plays of 10 yards or more than Philadelphia's 39.

A.J. Brown, their blockbuster draft-day trade acquisition, has quickly built a superb rapport with Hurts. The former Tennessee Titans wide receiver has registered a burn, which is when a receiver wins his matchup with a defender on a play where he is targeted, on 14 of his 21 targets and is averaging 8.2 burn yards per route (the league average is 3.6).

The threat Hurts provides in the run game has helped Philadelphia rack up 189.5 yards per game on the ground, second only to the Browns. While a small sample size, the Eagles' early success on the ground is illustrative of just how difficult they are to stop with the diversity of their attack.

There's more reason for doubt on defense, with a three-interception effort against the Minnesota Vikings in which the Eagles allowed only seven points following a 38-35 shootout with the Detroit Lions. Yet a very favourable schedule may not see any defensive failings properly tested until Week 12 against the Packers and allow Philadelphia to move into prime position to compete for the NFC's top seed.

Tampa Bay's average margin of victory across two games is 13 points. The Bucs eased past the Dallas Cowboys 19-3 and eventually emerged from a fist fight with the New Orleans Saints as 20-10 victors.

Yet it's tough to declare their start to the season as overly impressive, at least by Brady's lofty standards.

The Bucs have scored only two offensive touchdowns as they have battled injuries at the wide receiver position and struggles on the much-changed interior of the offensive line.

Rather than Brady making a hot start to the season he initially decided against playing, it is the Bucs' defense that has led the way.

There were 182 seconds left in their game with the Saints by the time they surrendered a touchdown for the first time this season, with the Bucs conceding only 4.25 yards per play, the third-fewest in the NFL.

Rodgers and Green Bay will provide an early and stern test of their credentials, but there is evidence to suggest the Bucs will eventually have a recipe for a potential second championship run in three seasons.

For all the protection issues in front of him, Brady has delivered a well-thrown ball on 81.7 per cent of his pass attempts and has thrown just one pickable pass in 60 throws. Given the defense's level of play and the weapons the Bucs still have to return, it stands to reason they will soon be delivering much more complete performances that will greatly enhance their reputation as contenders.

Thrashed by Buffalo on the night they raised their Super Bowl banner before having to survive a remarkable late scare against the lowly Atlanta Falcons, the Rams do not look like a team ready to repeat.

They still sit third in the power rankings, but there are plenty of red flags surrounding the Rams in this embryonic season.

It is the pass protection that stands as the most pressing concern, Matthew Stafford was under constant duress in the opener and injuries up front have hurt the Rams' cause further, hindering Stafford to the point where he is averaging almost half a yard under expectation in expected passing situations.

With 58 total points allowed, there are clearly vast improvements to be made on defense, too.

However, Aaron Donald already has a league-leading 17 pressures and Jalen Ramsey came up with the game-clinching interception in the endzone against Atlanta, and that often decisive star power makes the Rams a tough team to count out, especially with a game against an Arizona Cardinals team they have consistently dominated on the horizon in Week 3.

The greatest threat to the Rams from inside their own division comes from the team who suffered an injury that would have ended the hopes of most teams in the league.

San Francisco lost quarterback Trey Lance in just his second game of his first season as starter in the 49ers' 27-7 win over the Seattle Seahawks on Sunday.

Yet, by keeping Jimmy Garoppolo around on a restructured contract, the 49ers gave themselves an insurance policy, one that can keep them firmly in the mix even without Lance.

Garoppolo has helped the 49ers to the brink of Super Bowl glory in the 2019 season and the NFC Championship Game last term and, while the Niners' ceiling without Lance is perhaps lowered, the floor of Super Bowl-calibre roster has been raised by the former New England Patriot's return to the line-up.

Though they suffered an upset at the hands of a Chicago Bears in Week 1, the 49ers have one of the most complete rosters in the league and their defense is off to a magnificent start, allowing the second-fewest yards per play (4.08) in the NFL.

It was anticipated the safety position may be a weakness. Instead, it has so far been an unexpected strength, as has an inexperienced and remodelled offensive line that has won 81.6 per cent of its pass-blocking matchups. It will be tough to identify an obvious flaw on this team if the pass protection continues to excel, with the play in the trenches made even more critical because of Garoppolo's long injury history.

Hopes the Vikings could become one of the most dynamic offensive teams in football under Kevin O'Connell were damaged by Monday's 24-7 defeat to the Eagles.

Despite another vintage primetime meltdown from Kirk Cousins, the Vikings have the makeup of a team that could contend to go deep in the NFC playoffs if things break right.

They demonstrated how dangerous O'Connell's offense can be in their opening win over the Packers, with Justin Jefferson weaponised by the former Rams assistant's complex attack.

Even though he was kept in check by Philadelphia, Jefferson's 8.5 burn yards per target are the fifth-most among receivers with at least 10 targets in the first two games.

The offensive line remains a problem, but the early signs are that the Vikings' defensive front will be one that tilts games in their favour, having already registered six sacks for negative yardage.

Cousins is delivering the ball accurately, posting a well-thrown rate of 86.5 per cent and, though there are questions about his ability to perform under the brightest spotlight, a schedule that features 10 games against 2021 non-playoff teams could give the Vikings the edge of their division rivals in the fight to get to the NFL's postseason pressure cooker.

The Packers got the poor start out of the way in a Week 1 loss in Minnesota that left Aaron Rodgers visibly exasperated. Normal service was resumed, however, in the routine Week 2 win over the Bears.

Green Bay's problem is that the Packers have a roster in which several holes can be picked. The offensive line has struggled amid left tackle David Bakhtiari's prolonged absence, while the Packers' hopes of fixing their continually porous run defense have not come to pass as yet. They have surrendered 5.56 yards per play on the ground, the fourth-most in the NFL.

Rodgers has yet to build a rapport with a young receiver corps as the Packers look to put the Davante Adams saga and eventual trade to the Las Vegas Raiders behind them. Though the lack of a connection may be more down to a paucity of faith in his inexperienced wideouts' ability to catch the ball, rather than any worries about their success in creating separation.

Second-round pick Christian Watson has recorded an impressive 14.4 burn yards per target on the small sample size of seven targets. With Rodgers delivering a well-thrown ball on 89.3 per cent of his attempts, it might not be too long before Watson becomes a more integral part of the passing game, though the diversity the Packers gain through having running backs Aaron Jones and A.J. Dillon on the field at the same time can keep the offense performing efficiently regardless of how the wideouts progress.

Jones, unquestionably one of the most complete backs in the NFL, has produced a big play on three of his eight targets this season, with defenses forced to respect both the run and the pass when he and Dillon line up in two-running back personnel groupings.

Both the front and the back of the Green Bay defense have the talent to rise much higher on those lists and, if such strides are accompanied by Rodgers developing an understanding with his new weapons, the Packers will likely soon have a compelling case for being the conference's elite.