Simeone salutes Ancelotti's work as he compares Madrid to 2014 Atletico 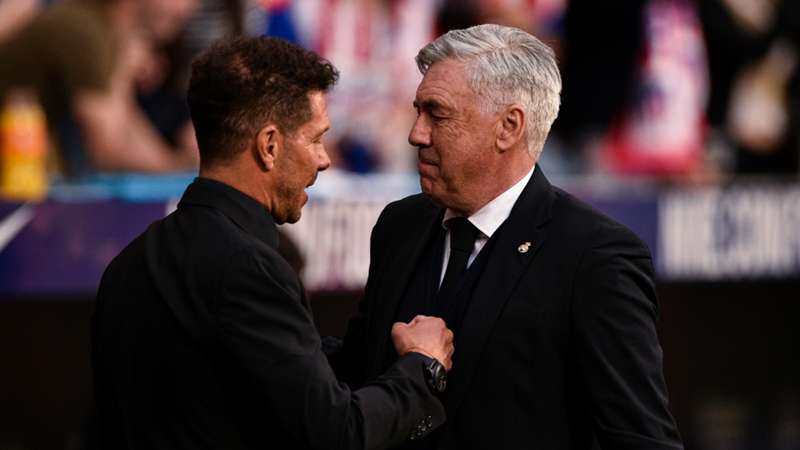 Atletico Madrid coach Diego Simeone applauded the work of his opposite number Carlo Ancelotti after losing to the Italian's Real Madrid in Sunday's derby.

Madrid have won all of their first six LaLiga games in the 2022-23 season and rarely looked especially worried against Atletico, despite the hosts dictating the tempo for much of the second half.

Goals from Rodrygo and Federico Valverde in the first period sent Madrid on their way and, although Mario Hermoso – who was also sent off late on for two bookings – pulled one back, the away side were good value for the win.

Simeone subsequently struggled to hide his admiration for Ancelotti's team, suggesting they were comparable to the Atletico side that won the 2013-14 LaLiga title.

"Madrid defends very well, runs little, closes spaces for you, attacks on the counter-attack," Simeone told Movistar+. "They have a terrific forcefulness.

"The forcefulness is wonderful and seeing a team that attacks from deep and counter-attacks reminds me of our team with [Diego] Costa, and they [critics] told us that we played defensively. But when there is force, football is wonderful.

"[Atletico] made a great effort, we were close to drawing, but it's true that a team that defends organised like them and counter-attacks like that, I like it because you can play deep and play well. I congratulate them, it is a great job by the Madrid coach.

"But I am happy with the work of my team because they stuck it out until the end, the players made a great effort. Mario's expulsion was a pity because there were a few minutes left."

The result left Atletico seventh in the table heading into the international window – they go to Sevilla on October 1 in their next game after the break.