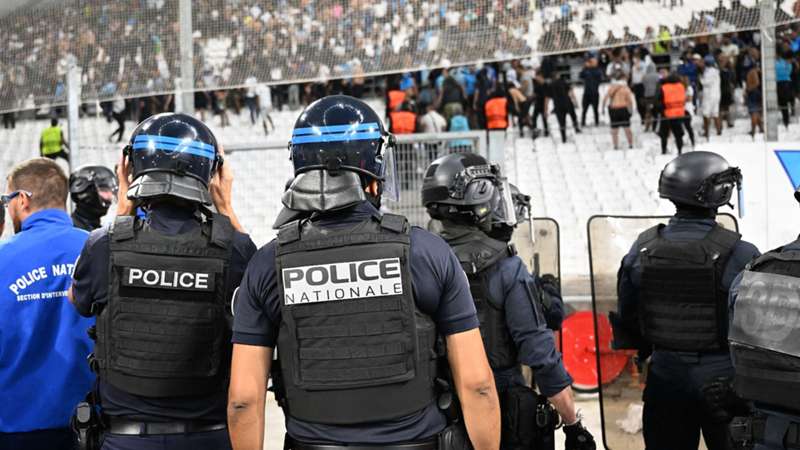 UEFA has opened disciplinary proceedings against Eintracht Frankfurt and Marseille after Tuesday's Champions League fixture was marred by crowd trouble.

Further footage appeared to show an Eintracht supporter giving a Nazi salute within the stadium, leading the Europa League holders to condemn the incident in a strongly worded statement.

Eintracht said: "The club dissociates itself completely and utterly from the one isolated incident that occurred during the run-up to the UEFA Champions League match between Olympique de Marseille and Eintracht Frankfurt, where a gesture resembling a Nazi salute was made.

"Anti-Semitic ideas are totally opposed to the club's categoric and immutable values and roots."

Asked about the incident after the win, Eintracht coach Oliver Glasner said: "I focus on the sporting aspect, my role is sport. But I believe that these idiots do not belong to football, nor to the world."

UEFA has now taken the decision to charge both clubs with several offences, with Eintracht's fans accused of the throwing of objects, lighting of fireworks, acts of damage and racist behaviour.

Marseille, meanwhile, have been charged with the throwing of objects, lighting of fireworks, use of laser pointers, crowd disturbances and blocking of public passageways.

"Disciplinary proceedings have been instigated in accordance with Article 55 of the UEFA Disciplinary Regulations following the UEFA Champions League group stage match between Olympique de Marseille and Eintracht Frankfurt played on 13 September 2022 in France," read a statement from UEFA.

"The UEFA disciplinary bodies will decide on the matter in due course."

Eintracht are set to face Premier League side Tottenham in back-to-back Champions League games in October, when Marseille will meet Sporting CP home and away.