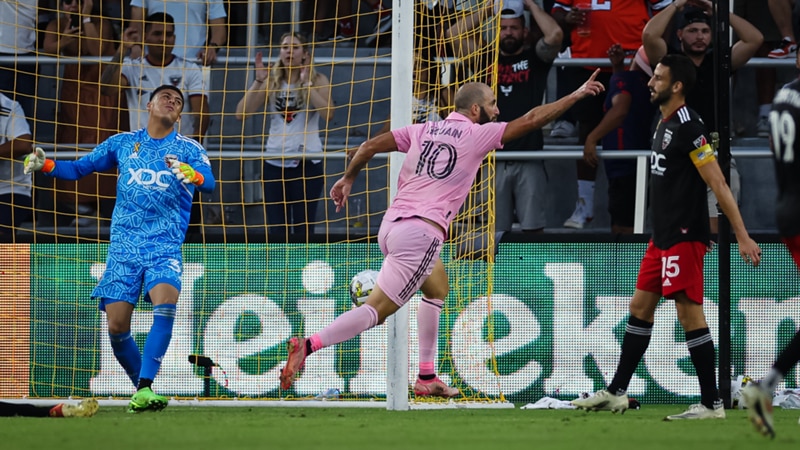 Western Conference leaders LAFC re-discovered their form after a recent slump with a 3-1 home victory over Houston Dynamo on Sunday.

LAFC have a 15-1-0 record when scoring first this season although Houston leveled the game in the 24th minute from Corey Baird's classy goal after Vela netted an eighth-minute spotkick.

Vela restored LAFC's advantage from the spot on half-time after Fabrice Picault's handball was spotted by the VAR, with Ryan Hollingshead lifting home a third in the 52nd minute.

LAFC remain top of the Western Conference, nine points ahead of second-placed Austin, with two more matchdays until the postseason begins.

Gonzalo Higuain scored a 94th-minute winner to boost Inter Miami's playoffs hopes with a 3-2 road win over DC United, who had Christian Benteke net his first goal for the club.

Higuain struck the winner in the fourth of eight stoppage-time minutes, with a first-time strike from Deandre Yedlin's low cross from the right.

Benteke had opened the scoring in the 22nd minute with a back-post left-foot volley, before Leonard Campana's double for Inter.

Taxiarchis Fountas equalised in the 57th minute before Higuain's late winner, which means Inter are seventh in the Eastern Conference, moving above Columbus Crew, who conceded again late in a 1-1 draw with Portland Timbers on Sunday.

The Crew were denied all three points with Santiago Moreno lashing home a 95th-minute equaliser for the Timbers, after Kevin Molino's first-half strike.