Cowboys surge to victory with dominant second half against Giants 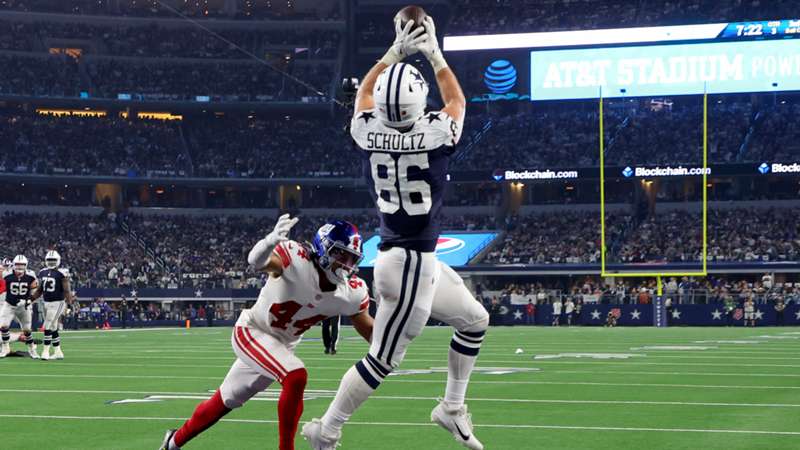 The Dallas Cowboys' defense woke up at half-time and took over the game against the New York Giants, carrying their side to a 28-20 victory on Thanksgiving.

What was a competitive contest in the first half turned into one-way traffic in the third quarter, with Cowboys tight end Dalton Schultz punctuating back-to-back drives with touchdown catches to jump ahead 21-13 heading into the fourth.

The last quarter was more of the same, adding another touchdown with a hand-off to backup tight end Peyton Hendershot from the two-yard line to complete the rout.

New York only had four possessions after half-time, resulting in a punt and two turnovers-on-downs, before a consolation touchdown in the final seconds with the game well-and-truly decided, as the Cowboys showed why many are picking them as the best defensive team in the NFL.

Defensive Player of the Year favourite Micah Parsons collected two of the Cowboys' three sacks on Giants quarterback Daniel Jones, taking his tally for the season to 12, trailing only Matthew Judon of the New England Patriots (13).

Something tells us @MicahhParsons11 is gonna be eating GOOD after this game!

The Cowboys' two-pronged rushing attack also delivered, with Ezekiel Elliott and Tony Pollard combining for 152 yards and a touchdown from 34 carries, while CeeDee Lamb led all receivers with six catches for 106 yards. Dak Prescott threw two touchdown passes with two interceptions on 21-of-30 passing for 261 yards.

The result breaks the tie between the two sides in the NFC East, with the Cowboys now owning sole possession of second place in the NFC East at 8-3, while the Giants slipped to 7-4.