NFL Talking Point: Can the Jets finally beat the Patriots? 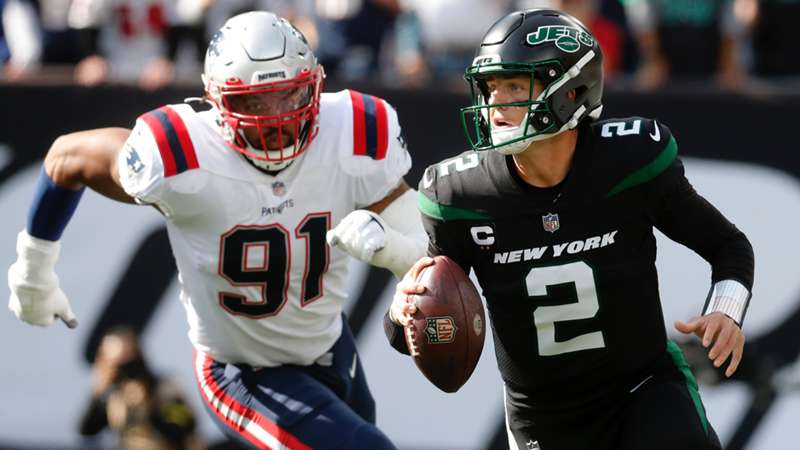 Three weeks ago, the New York Jets looked to have their best shot to beat the New England Patriots for a long, long time.

It was a defeat that marked the Jets' 13th successive loss to the Patriots, who have won every game in this matchup since the beginning of the 2016 season.

The Patriots' run of dominance over the Jets has them tied for the longest active win streak against a single opponent for any team (Kansas City Chiefs over Denver Broncos).

However, after recovering to beat the Buffalo Bills the week after and then seeing the Bills lose at home to the Minnesota Vikings, the Jets are second in the AFC East at 6-3, just one game in the win column behind the Miami Dolphins.

With the Dolphins on bye, a win for the Jets on the road against the Patriots this week will move them to the top of the AFC East at 7-3. Lose, and the Jets may find themselves bottom of the pile at 6-4.

Their ability to finally overcome the Patriots could define how far the Jets go in an unexpectedly successful 2022 campaign to this point.

But can they finally get over their arch nemesis?

See you in Foxborough.

History clearly says no. The Jets have not beaten New England in Foxborough since a 34-31 overtime win in the 2008 season.

On that day, Brett Favre was the quarterback for New York while Matt Cassel was under center for the Patriots in place of an injured Tom Brady.

The Jets' hopes of ending their wait for a road win over the Patriots may hinge on current signal-caller Wilson avoiding Favre-esque gunslinging tendencies.

Back in Week 8, the Jets outgained the Patriots by nearly 100 yards, averaging 6.7 yards per play to New England's 3.8.

However, they were hamstrung by a tragicomedic three-interception showing from Wilson, who displayed a baffling aversion to throwing the ball away when there were no receiving options open.

For the season, Wilson has thrown 10 turnover-worthy passes, accounting for 6.67 per cent of his throws, the fourth-highest ratio among quarterbacks with at least 100 attempts.

Against the Bills, however, he did not throw a single interceptable pass, Wilson responding to his coaches' message of accepting a throwaway as a positive play.

In that 20-17 win over Buffalo, the Jets emerged victorious by relying on the formula they will likely need against New England, one which involves their quarterback staying largely within the structure of the offense and making sensible throws to a group of playmakers that have the talent to do damage, even in a matchup with an impressive Patriot defense.

That formula is reliant on the Jets' defense putting Wilson and the offense in advantageous positions. It did just that in Week 9 and the numbers suggest they should do so again in a matchup with Patriots signal-caller Mac Jones.

SAUCE PICKS IT OFF

Jones' pickable pass rate of 7.41 per cent is the worst in the NFL (min. 100 pass attempts) and he struggles significantly when pressured, delivering an accurate ball just 71.4 per cent of the time under duress (the average for quarterbacks with at least 25 such attempts is 73.1%) and throwing a turnover-worthy pass on five of his 49 attempts under pressure this year.

The Jets' defense ranks second in the NFL by pressure rate (44.1 per cent) and, though the Patriots possess one of the better pass-blocking lines in the league, New York will surely look to lean on their fearsome defensive front to wreck New England's gameplan and significantly ease the burden on Wilson by creating turnovers that tilt the field in their favour.

New England's defense ranks third in defensive pressure rate and the Patriots will surely employ a similar approach in the hope of inducing another meltdown from Wilson, who has spent much of the season playing behind a banged-up offensive line.

But if Wilson is careful and decisive with the football, the Jets, as they showed in a home game with the Patriots that could have been markedly different if not for his turnovers, have the talent edge on both sides of the ball to dominate the Patriots statistically and on the scoreboard.

The Jets drafted Wilson in part because of the incredible improvisational skills he displayed in college at BYU. Those have not translated effectively to the NFL, however, and their hopes of finally ending a tortuous wait for a win over the Patriots may depend on Wilson's success in curbing his creative tendencies.