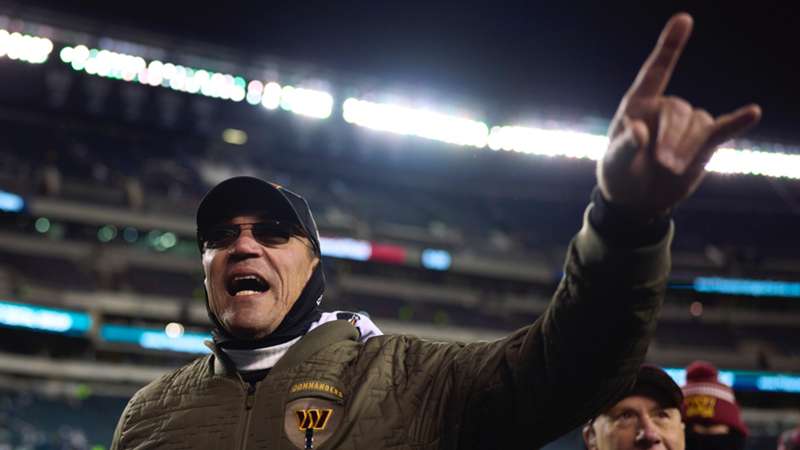 Ron Rivera hailed the unity of his Washington Commanders players after they handed the Philadelphia Eagles their first loss of the season following a turbulent week.

Washington dominated the game on the ground, finishing with 157 rushing yards as they controlled the clock, holding the ball for more than 40 minutes and limiting the Eagles to under 20 minutes of possession.

"We found that one of the best ways to slow [Eagles quarterback] Jalen Hurts down is to keep him off the field," Rivera said.

Rivera was emotional after the win, which came just weeks after the death of his mother.

It also came amid more controversy surrounding the team's ownership.

Last week, the attorney general for Washington, D.C. announced he had filed a civil lawsuit against the Commanders, owner Daniel Snyder, the NFL and commissioner Roger Goodell for allegedly colluding to deceive fans and district residents over the NFL's investigation into the franchise's toxic workplace culture and allegations of sexual assault.

The Commanders then received widespread criticism for responding to the attorney general with a statement referencing the shooting of running back Brian Robinson Jr. in an attempted robbery in August.

Robinson has since returned to the field after recovering from his injuries, and it was he who played a leading role in the win over the Eagles.

The rookie rushed for 86 yards and a touchdown as the Commanders made it four wins in their last five.

"In a situation like this, I've always thought that we've got the kind of guys in that locker room that can do things, and we're starting to see it come together," added Rivera.

"It meant a lot because the guys were able to stay focused. It resonates with these guys, the hard work is beginning to pay off.

"Coming into this game we felt we had an opportunity. We told the guys don't worry what's going on out there, just stay focused on what's important; I'll handle all the interesting stuff. They did that. We went into it with the attitude, 'Don't be surprised.'"

Plenty may be surprised to see the Commanders firmly in the playoff mix at 5-5, but Rivera is keen for his team not to get ahead of themselves.

He explained: "We can't just sit back and say we've arrived, because we have not arrived."