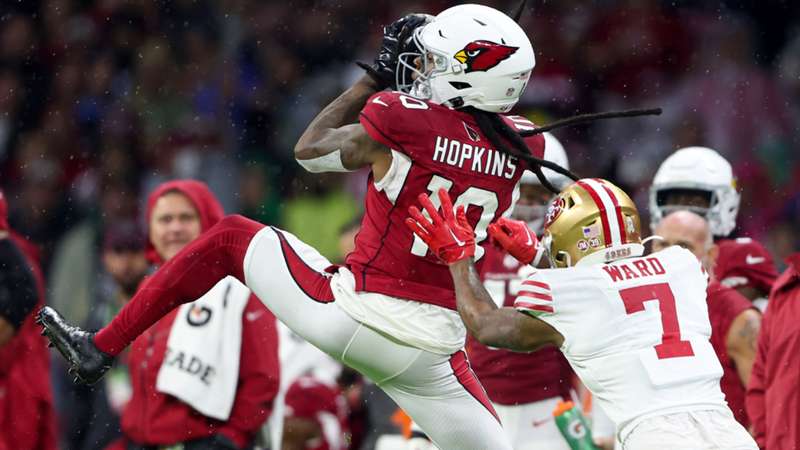 San Francisco 49ers cornerback Charvarius Ward did not gain any respect for star Arizona Cardinals receiver DeAndre Hopkins when they matched up on Monday.

The 49ers won the contest convincingly 38-10 as the Cardinals were without starting quarterback Kyler Murray, missing his second consecutive game through injury.

Despite the Cardinals' struggles, Hopkins managed a productive outing, catching nine passes for 91 yards from his 12 targets. Since his return from a six-week suspension for traces of performance enhancing drugs in his system, Hopkins leads the NFL in both targets and catches.

However, speaking to the 49ers' radio broadcast after the win, Ward took the opportunity to trash the five-time All-Pro, calling him "steroid boy".

"D-Hop, he think he a tough guy," he said. "He think he still one of the best receivers in the league, and he really not.

"He was getting locked up. He was doing some dirty things. He tried to clip me, he grabbed me by the throat. He grabbed my facemask on one play, so I don’t respect his game. That’s steroid boy."

Ward, who arrived as a key free agent signing in the offseason from the Kansas City Chiefs, led the 49ers in total tackles in the game, tying his season-high with 10.

It was the third consecutive week the 49ers' defense have not allowed a single point in the second half, leading to three wins on the trot to climb atop the NFC West with a 6-4 record.

SF has 2 of the top 5. Gipson made a really nice open-field stop of James Conner last night