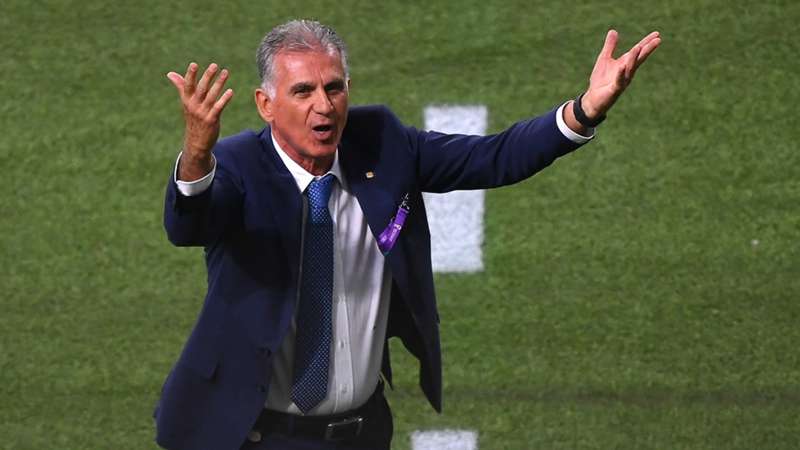 Carlos Queiroz criticised Iran's supporters after his team were thrashed 6-2 by England in their World Cup opener, advising those who "aren't ready to support the team" to "stay home".

Human rights groups say more than 400 people have lost their lives amid a crackdown on protests in Iran, which began following the September death of Mahsa Amini, a 22-year-old woman who died in police custody after being arrested for her refusal to wear the mandatory hijab.

Jeers were also audible throughout the anthem, while some Iran fans were seen holding signs professing their support for women's rights.

At his post-match press conference, Queiroz called for Iran's fans to offer his players their unconditional backing, characterising sections of their support as "teachers" and "moralists".

But it was unclear which section of the supporters he was aiming his criticism at.

"Please, the teachers, the moralists, let the kids play the game. These kids only want to play the game," Queiroz said.

"I hope the players of England and Wales and United States praise them for having the courage to play the game. They are here to bring pride and happiness to the people.

"You don't know what the kids have been experiencing behind the scenes just because they want to play football. Whatever they [the players] say, they [critics] want to kill them.

"Of course, we have our opinions and we will express them in the right time. But I love the game and don't want the players to do something that isn't loyal to the game that is about the entertainment, joy and pride.

"Everyone knows the present circumstances of the environment of my players is not the best environment. They are human beings, they are kids.

"I am very proud of what they did but of course in 2014 and 2018 we had full support of the fans. You saw what happened today, the fans who aren't ready to support the team should stay home."