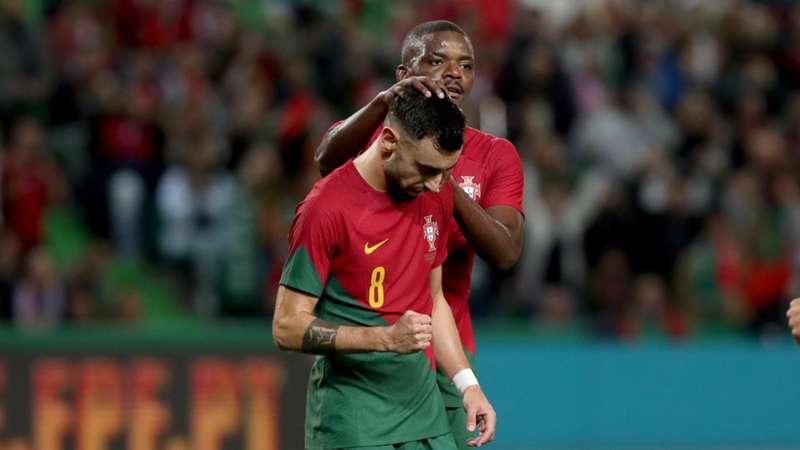 Bruno Fernandes scored twice as Portugal eased to a 4-0 victory over Nigeria in their sole World Cup warm-up game, despite missing captain Cristiano Ronaldo through illness.

Fernandes' first-half double, the latter from the penalty spot, set Portugal on their way in their final outing ahead of Qatar, before Goncalo Ramos scored after Emmanuel Dennis missed a second-half spot-kick.

Joao Mario added a late fourth and Portugal will now turn their attention to next Thursday's Group H opener against Ghana as they aim to reach the World Cup quarter-finals for the first time in four tournaments.

Fernandes miscued an effort just wide in the opening stages but made amends after nine minutes as he turned home Diogo Dalot's cutback pass.

Joao Felix curled narrowly over before Bright Osayi-Samuel was adjudged to have handled inside the area, with Fernandes sending Francis Uzoho the wrong way with his spot-kick.

A host of half-time changes did little to alter Portugal's dominance, though Samuel Chukwueze forced a rare Rui Patricio save before Uzoho tipped over from Joao Felix.

The VAR deemed Dalot to have shoved Osayi-Samuel inside the area, though Patricio saved Dennis' penalty before Ramos sealed victory by tapping in Raphael Guerreiro's unselfish pass.

A simple Joao Felix offload teed up the final goal as Joao Mario prodded into an empty net.

What does it mean? Santos' side in cruise control ahead of Qatar

The ongoing controversy surrounding five-time Ballon d'Or winner Ronaldo could have easily derailed Portugal, though that did not prove the case in a routine win.

Santos' side dominated from the first minute without their talisman and will be confident of escaping Group H, which also includes Uruguay and South Korea.

However, the likes of Ghana and Uruguay – the latter with the likes of Federico Valverde, Ronald Araujo and Darwin Nunez – will prove much sterner tasks than Nigeria in Qatar.

All the talk in the build-up to the friendly surrounded Fernandes' United team-mate Ronaldo, though it was the midfielder who shone at Estadio Jose Alvalade.

Fernandes has regularly played the backing role to Ronaldo at Old Trafford and Portugal, but offered a timely reminder of his qualities with two goals as well as misplacing just three of his 37 passes.

While Portugal impressed without their star attacker, Nigeria were left wanting in their forward line as Terem Moffi failed to deliver.

The 23-year-old completed just six of his 11 passes and managed 15 touches – the fewest of any outfield starter – before his second-half removal.

Portugal's curtain-raiser comes against Ghana in Doha, while Nigeria are not scheduled for action until facing Guinea-Bissau in Africa Cup of Nations qualification in March.