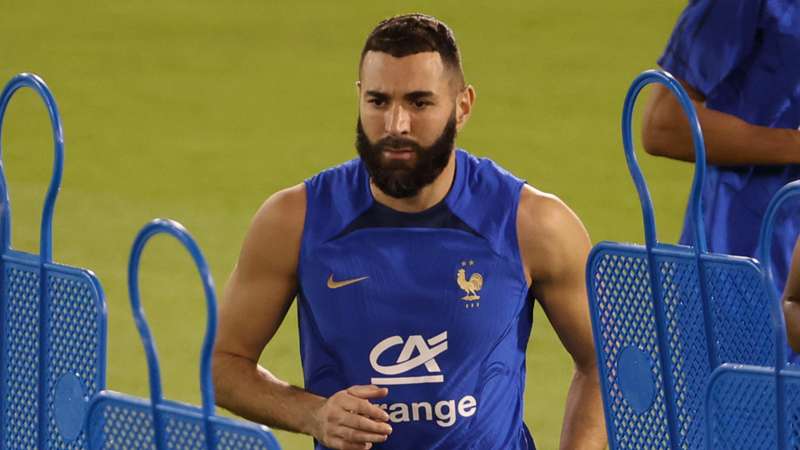 Karim Benzema will miss the World Cup after the France striker suffered an injury blow on the eve of the tournament.

Benzema won the Ballon d'Or last month after a spectacular 2021-22 season that saw him score 44 goals in 46 games for Madrid, helping the Spanish giants win LaLiga and the Champions League.

However, he has been troubled by physical setbacks this term and the most untimely and crushing of all blows for the 34-year-old came on the day before Qatar 2022 was set to get under way.

Benzema only resumed full training with France on Saturday, after recent muscle trouble, but he could not complete the squad session due to injury.

He underwent tests that produced results ruling him out of the tournament.

The French Football Federation said in a statement: "Karim Benzema has pulled out of the World Cup with a thigh injury. The whole team shares Karim's disappointment and wishes him a speedy recovery."

The former Lyon frontman was troubled by a knee blow earlier this season before missing further fixtures for Madrid after suffering from muscular fatigue in his left quadriceps, with Saturday's blow seemingly a recurrence of that.

World Cup holders France begin their defence on Tuesday against Australia, before also tackling Denmark and Tunisia in Group D on November 26 and 30 respectively.

Benzema's absence from the tournament is the latest in a line of major setbacks for France, even though coach Deschamps also has the likes of Kylian Mbappe, Antoine Griezmann and Olivier Giroud as forward options.

RB Leipzig's prolific Christopher Nkunku was forced to pull out of the squad this week after suffering knee ligament damage in a training collision with Eduardo Camavinga.

They also lost star midfielders Paul Pogba and N'Golo Kante, who would have been central to Deschamps' plans.