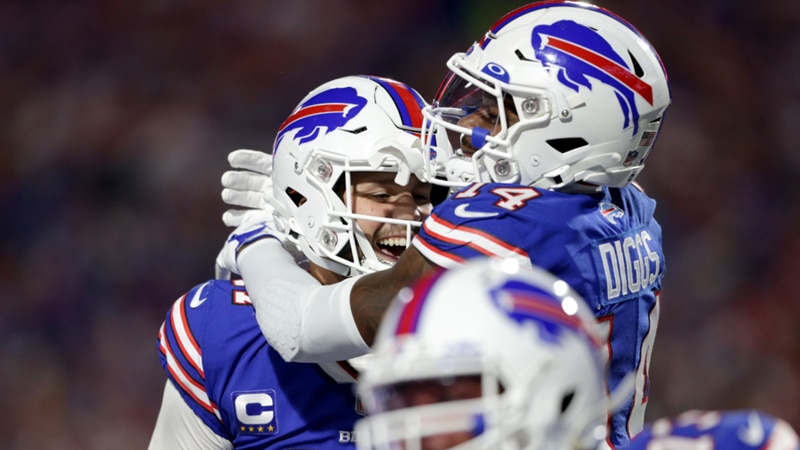 Josh Allen and Stefon Diggs connected for three touchdowns as the Buffalo Bills moved to 2-0 for the third time in the past four seasons with a 41-7 win over the Tennessee Titans on Monday.

Diggs got on the end of three of those, including a 46-yard third-quarter hand cannon, having 12 receptions for 148 yards. Allen has contributed to four or more TDs in each of his past four games, including playoffs.

Buffalo's win means they have won six straight regular-season games, which is the longest active streak in the NFL. It is also the Bills' NFL-best 13th 14-point-plus win over the past two seasons, with the Tampa Bay Buccaneers next best with eight.

Titans QB Ryan Tannehill, who was benched late, threw 11 of 20 passes for 117 yards with no touchdowns and two interceptions, including a Matt Milano pick six. The Bills face the 2-0 Miami Dolphins in Week 3, with three of their next four games on the road.

The Philadelphia Eagles joined the Bills with a 2-0 record for the first time since 2016 after a 24-7 triumph over the Minnesota Vikings led by Jalen Hurts, who had a major hand in all three of their touchdowns.

Hurts threw for one touchdown (finishing with 26-of-31 passing for 333 yards), while he ran in two TDs (57 yards from 11 carries), helping the Eagles open up a 24-7 half-time lead, with neither side scoring in the second half. Hurts landed a 53-yard pass for Quez Watkins' TD.

The Eagles defense managed three interceptions from Vikings quarterback Kirk Cousins, who completed 27 of 46 passes for 221 yards with one touchdown to Irv Smith Jr.