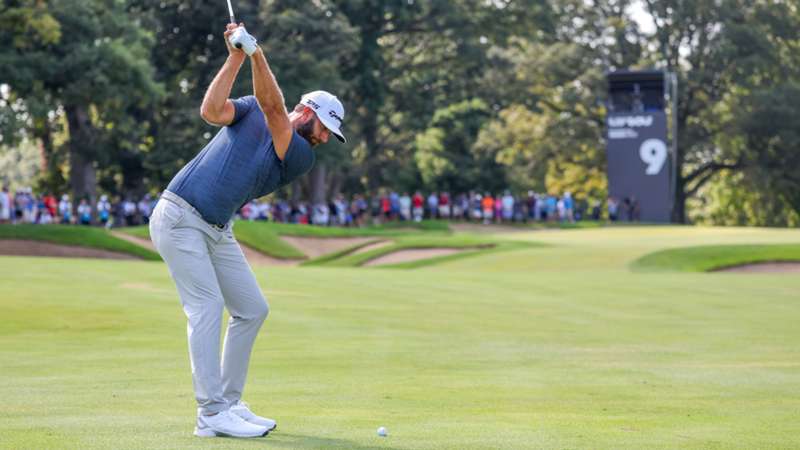 Dustin Johnson leads the field by three strokes after the first round at LIV Golf Chicago, shooting a nine-under 63 in his first trip around Rich Harvest Farms.

Johnson's best run came from the sixth hole through to the 12th, where he collected six birdies over the space of seven holes.

Speaking after stepping off the last green, Johnson said he is in "a nice groove".

"My swing was really solid all day, hit it really close," he said. "I didn't have many long putts, but I holed a lot within 10 feet, and I struck it really well all day.

"Right now I feel like I've got my swing in a nice groove, so for me as long as I hit a couple balls every other day I can keep it there."

Cam Smith lights it up

Alone in second is Smith with a bogey free six under, and one stroke away in sole possession of third is Matthew Wolff at five under.

Johnson has single-handedly pulled his team 4 Aces GC to the top of the leaderboard at 12 under – with team-mates Pat Perez at four over and Patrick Reed at two over – while Smith's Punch GC are in second place, with Matt Jones also pulling his weight to finish tied for fourth at four under.

Two Majesticks GC players are with Jones at four under – Henrik Stenson and Lee Westwood – to leave them in third in the team standings.

Bryson DeChambeau and the Stinger GC pairing of Louis Oosthuizen and Charl Schwartzel round out the top 10 at three under.

It is one of the strongest starts to a LIV tournament for Phil Mickelson, who is tied for 11th at two under along with Brooks Koepka, Harold Varner III and seven others.