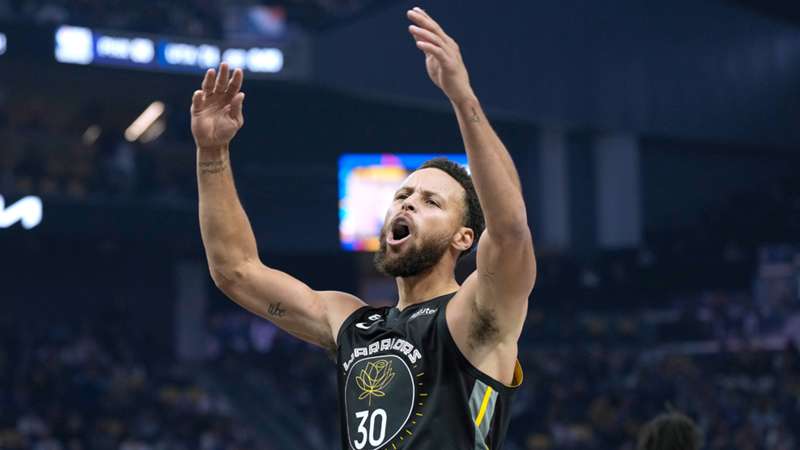 The Splash Brothers were at the peak of their powers in the Golden State Warriors' 127-120 road win against the Houston Rockets on Sunday.

Fresh off his first NBA Finals MVP, Stephen Curry continued his remarkable season with 33 points (11-of-20 shooting, seven-of-14 from three-point range) and a season-high 15 assists. It was one assist shy of his career high, set back in 2013 and matched in 2014.

But the story was his backcourt partner Klay Thompson, who is shooting a career-worst percentage from both the field (36.3 per cent) and from long-range (33.6 per cent) this season.

He began to right the ship with a stunning 43-point performance, hitting 10 of his 13 three-point attempts on his way to 14-of-23 shooting. It is the sixth game of his career with at least 10 three-pointers in a game, and he also owns the all-time record with 14.

For the Rockets, the third overall selection from this year's NBA Draft, Jabari Smith Jr, showed exactly why he was so highly coveted. The long-armed, six-foot-11 power forward scored a season-high 22 points on eight-of-14 shooting, hitting three long-balls.

The win is the Warriors' first on the road this season from nine attempts, giving them an 8-9 record, while the Rockets fell to 3-14.

Kevin Durant became the fourth player in NBA history to score at least 25 points in the first 17 games of a season in Sunday's 127-115 victory against the Memphis Grizzlies.

In the return of Kyrie Irving from his team-imposed suspension, Durant led the Nets with 26 points on nine-of-16 shooting, adding seven rebounds, seven assists, a steal and a block. The last player to score at least 25 in their first 17 games of a season was Rick Barry back in the 1966-67 campaign.

The Nets also benefited from Ben Simmons' best game since arriving with the team, scoring a season-high 22 points on 11-of-13 shooting with eight rebounds and five assists, boasting a game-high plus/minus of plus 19.

Irving was quiet in his return, hitting five-of-12 shots for 14 points and zero assists with four turnovers.

Fox leads the Kings to sixth win in a row

The Sacramento Kings have now won six games in a row after a 137-129 shootout against the Detroit Pistons.

Sacramento have scored at least 120 points in each of their wins on this streak, highlighted by a 153-point outing against the Nets, which is the most points scored by any team this season.

De'Aaron Fox top-scored with 33 points on 11-of-18 shooting, adding seven assists. After never previously shooting better than 48 per cent in a season, Fox is 55.4 per cent from the field this campaign, and a career-best 37.5 per cent from three.

All five starters hit double figures, led by 33 points from De’Aaron Fox, in Sacramento’s 137-129 win over the Pistons on Sunday #LightTheBeam pic.twitter.com/idgCENXvvE