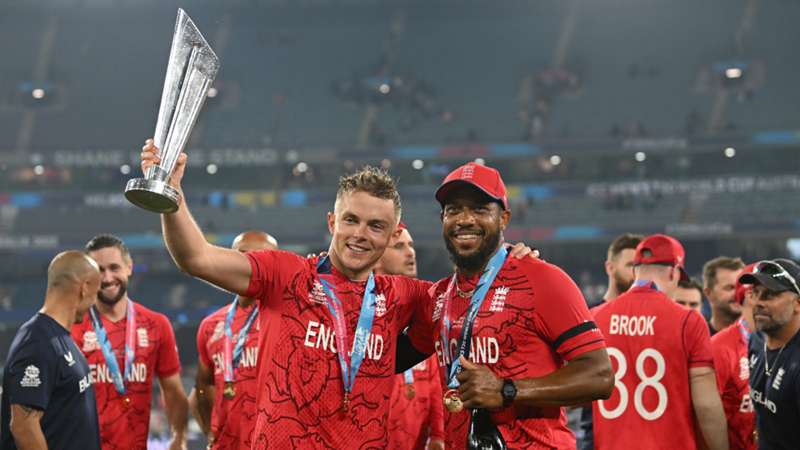 England's T20 World Cup success can be used as a springboard to cement their status as one of the all-time great white-ball sides, believes Ryan Sidebottom.

A five-wicket win over Pakistan in Melbourne means Jos Buttler's side are the first men's team to hold both major ICC titles, having won the 50-over World Cup in 2019 on home soil.

Victory in Australia means England become just the second team to win the T20 World Cup twice, with Sidebottom having been a member of the 2010 title-winning side.

A failure to capitalise on that initial success meant it was the best part of a decade before they triumphed again in limited-overs cricket, but the former Yorkshire bowler thinks they are primed to push on this time.

"When we won it in 2010, we had an opportunity to go on and build, get better as a nation and we kind of got left behind again," he told Stats Perform.

"But now we have a huge opportunity to become the best, [to be] number one in the world in all formats. We've got the players, we've got the facilities now.

"I think we've got everything. We can achieve great things. I really believe that if we keep moving forward and keep striving to get better and better."

No small part of England's success came from the performances of Sam Curran, with the Surrey all-rounder named player of the tournament for his performances with the ball.

Having been far from an assured first-choice pick before arriving in Australia, the 24-year-old has effectively cemented his place, with Sidebottom feeling he is an invaluable piece of the puzzle now.

"I think he's been amazing," he added. "He's improved so much as a cricket. You throw the ball to Sam Curran, and he makes things happen.

"That's quite a rare commodity for someone. You know he's either going to take a wicket or do something very special. [England] have so many left-armers, but he's been the pick of everyone."