'Went back to our roots': Carlos Queiroz elated after Iran's vital World Cup win over Wales 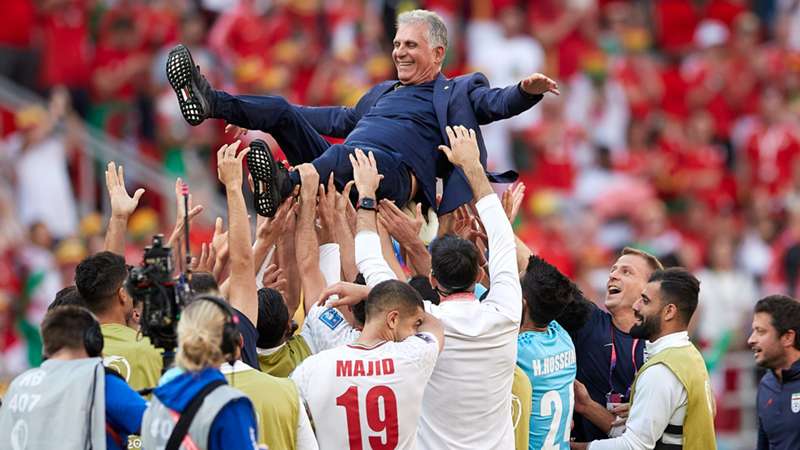 Carlos Queiroz attributed Iran's vital World Cup win over Wales on Friday to his players going back to their "roots".

Rouzbeh Cheshmi and Ramin Rezaeian both scored in stoppage time to seal a 2-0 victory for Iran after Wayne Hennessey had been sent off late on for Wales.

Iran were thumped 6-2 by England in their opening game in Qatar, but a deserved three points against the Dragons has injected fresh life into their bid to reach the last 16.

Queiroz was thrilled by his side's display, describing the win as a "gift" to Iran's fans.

What a moment for IR Iran! #FIFAWorldCup | #Qatar2022 pic.twitter.com/2OLKu7hlLp

"We played with amazing character," he said. "We always play with a sense of unity and cohesion. Today, we went back to our roots. We were able to put everything in our minds.

"The second point was to get rid of this bad feeling of bleeding. I told the players very clearly, football, it is a game of different moments. It is not because you win or you do not win. Sometimes you lose your dignity, you lose your honour.

"First game, we were bleeding in our pride. This was an opportunity to rebound, close, to stop bleeding and get back to credibility, to show the football we have inside our souls, inside our minds.

"What was important today was to keep our hopes open. Today, we scored and we have three points.

"Now we need to be sure we are good enough to go to the second round. This game was a gift to Iranian fans. North, south, east and west, it is a gift to all of them."

Wales' hopes of reaching the round of 16 are hanging by a thread following the defeat, with the Dragons needing to beat England on Tuesday to stand any chance of escaping Group B.

Boss Rob Page knows his side will have their work cut out against the Three Lions, but he insists his players will do everything to give Welsh supporters something to cheer.

3 - Wayne Hennessey is only the third goalkeeper ever to receive a red card at the World Cup, after Itumeleng Khune for South Africa v Uruguay in 2010 and Gianluca Pagliuca for Italy v Norway in 1994. Dismissed. pic.twitter.com/Tpdtc35i9t

"We're low at the minute, but we'll get them back up tomorrow and prepare for another tough game to finish with.

"We've got to get on with it. We can't sit and cry about it. We've got an opportunity to go and put it right. Thankfully, the game is just around the corner so we can go back out.

"We want to give our supporters something to cheer about. They've shown massive commitment to come over, and that really disappoints me as well, that we've given that performance for them today.

"We'll bounce back, we'll pick them up and we'll go again."