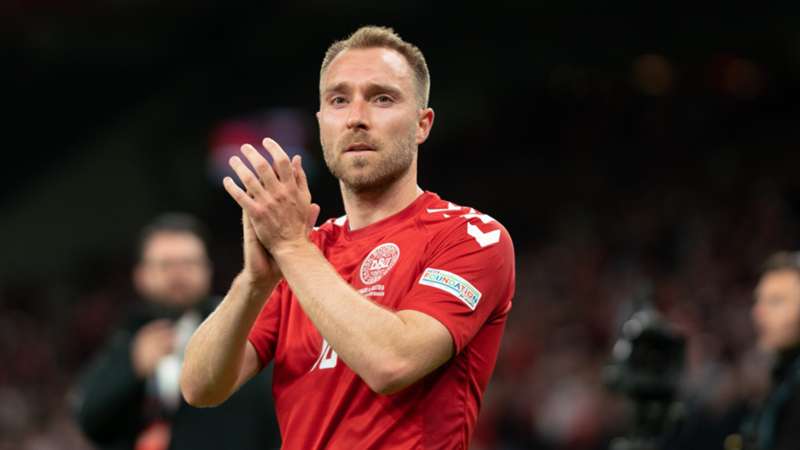 Christian Eriksen's love for football brings joy to Kasper Hjulmand, who believes Denmark must set out to win the World Cup.

Denmark's players shielded their team-mate from the eyes of the crowd and cameras as Eriksen received emergency medical treatment.

The midfielder made an incredible recovery and six months later returned to action when he signed for Brentford, having been unable to play for Inter after having a cardioverter defibrillator device fitted.

Eriksen was superb for the Bees and earned a move to Manchester United, where he has made a strong start to the season and is back to spearhead Denmark's bid to go deep into the World Cup.

"Before the Euros, before everything happened with Christian I said he was the heart and heartbeat of the team," Hjulmand said in a press conference.

"When he plays he has a fantastic way of taking the rhythm of the game, feeling and controlling the game with his passing, intelligence, his vision and also his work ethic.

"It's great to have Christian back. He's a fantastic player but an even better person and on and off the pitch he gives us so much.

"I remember when he came back in March, in the first minutes he scored against the Netherlands in Amsterdam, and after that we had him back.

"It's just a pleasure to work with Christian, you have to drag him off the pitch every day. He just loves playing. The love for the game is the most important thing for Christian."

Denmark went on to reach the semi-finals of the European Championship without Eriksen, losing to England.

They face Tunisia in their opening match on Tuesday, with France and Australia their other opponents in Group D.

Asked by Stats Perform what targets Denmark had set for the tournament, Hjulmand replied: "I'm not very good at goal-setting like that. Our dream is to win something.

"So when you go into a tournament I think this group of players has the quality to win, and I mean win everything.

"Are we the favourites? No. I think still we have something to improve in our squad, our game, but we can beat everyone on the day.

"We have a very strong self-confidence, a very good group of players working well together and the best way of winning is to dream big and actually say that we go into a tournament to win it and then focus what's right in front of you.

"The first thing is a very difficult game against Tunisia. We will see from there. We have a very good feeling, we are ready to attack."