Saka, Bellingham headline for England as Three Lions start with a 6-2 roar over Asian powerhouse Iran 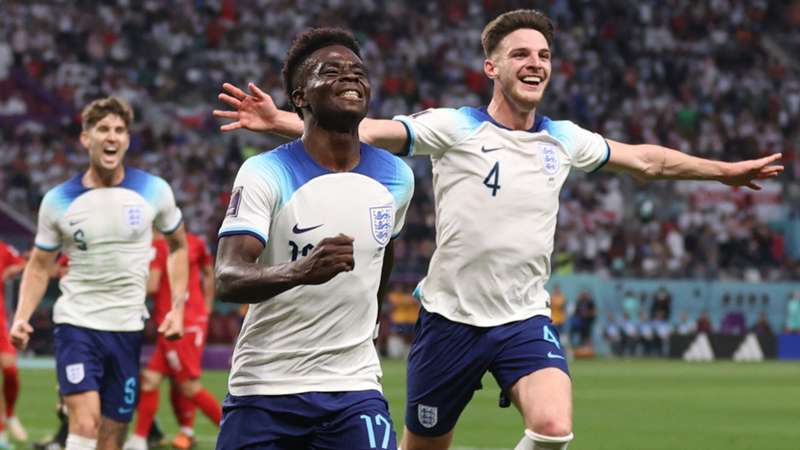 Bukayo Saka scored twice as England made a flying start to their World Cup campaign by thrashing Iran 6-2 at the Khalifa International Stadium on Monday.

Mehdi Taremi denied England a clean sheet with a powerful finish, but substitutes Marcus Rashford and Jack Grealish responded as the Three Lions sent out a message to their Group B rivals despite Taremi scoring a very late second from the penalty spot.

Harry Maguire was a nuisance in the opposition box and saw an early penalty appeal waved away before powering a header against the crossbar in the 32nd minute.

With Iran struggling to contain the Three Lions, Maguire nodded a corner into the path of Saka to unleash a fierce volley into the top-right corner and double England's lead.

Southgate's rampant side then made it 3-0 in first-half stoppage time when Sterling cutely diverted home Harry Kane's right-wing cross.

There was no sign of England slowing down after the break, as Saka clinched his brace by cutting inside to drill a low finish beyond Iran substitute Hossein Hosseini.

Taremi denied England a clean sheet by firing in off the crossbar, but substitutes Rashford and Grealish produced composed finishes as the Three Lions extended their lead to 6-1.

There was one last piece of action when Taremi converted from the spot at the end of stoppage time after a VAR check contentiously ruled he was fouled by John Stones.