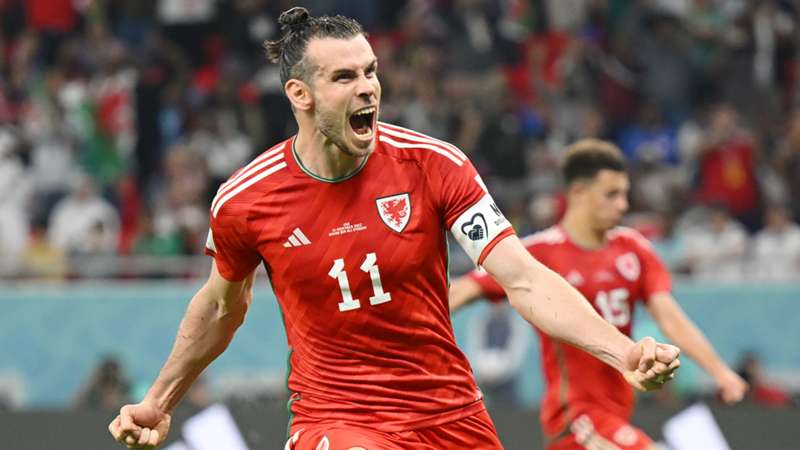 Wales had talisman Gareth Bale to thank once again as their captain won and scored a penalty to salvage a 1-1 draw with the United States at the World Cup.

Timothy Weah had put the USA deservedly ahead in the first half, scoring in a World Cup when his illustrious father – 1995 Ballon d'Or winner George – was never able to play in one.

But Bale, largely anonymous before his late show, drew a rash tackle from Walker Zimmerman and duly smashed home the resulting spot-kick to seal a share of the spoils in Group B.

The USA should have been rewarded for a strong start inside 10 minutes as Josh Sargent hit the post with a close-range header after Wayne Hennessey had spared Joe Rodon's blushes, preventing an own goal.

But Wales caved to the pressure in the 36th minute. On a quick counter-attack, Christian Pulisic brilliantly found Weah, who coolly prodded past Hennessey.

Kieffer Moore's introduction in place of Daniel James was the catalyst for Wales’ improvement.

Ben Davies forced Matt Turner into a fine save with a diving header, with Moore heading over from the resulting corner.

With Brenden Aaronson fluffing his lines at the other end, Wales got their lifeline when Zimmerman clumsily lunged in on Bale, who – with eight minutes remaining – lashed home an unstoppable spot-kick into the right-hand corner, giving the huge mass of Wales fans behind the goal a moment to savour.

What does it mean? Wales show their grit as experience tells

For so much of the match, it seemed the occasion might have got the better of Rob Page's team, but their captain fantastic stepped up – as he always seems to do for his country.

There is no doubt Gregg Berhalter will be frustrated, though. He fielded the USA's youngest starting XI at a World Cup since 1990 and they could, and possibly should, have put the game beyond Wales given their first-half dominance, but perhaps the inexperience showed in the crucial moments.

George Weah is often regarded as one of the greatest players to never appear in a World Cup, but the family name will go down in the history of the tournament after all, thanks to son Timothy.

The Lille forward, playing out wide right, took his opener brilliantly, taking his tally of international goals to four. The last player to score against Wales in a World Cup was Pele, 64 years ago.

Page got things wrong in the first half. His decision to leave Moore on the bench was a strange one, with the shape he deployed in midfield equally confusing.

But Bale was there at the end. Wales' all-time leading scorer has netted 85 per cent (35/41) of his international goals in competitive matches. He lives for the big moments, and rarely misses.

- Two of the three meetings between the United States and Wales in all competitions have finished level, with the USA winning the other 2-0 back in 2003.

- The USA ave won their opening game at just three of the 11 World Cup tournaments they have appeared in (D3 L5).

- Wales (D2 L4) have gone six games without a victory in all competitions for the first time since September 2010 to May 2011 (six successive losses).

- The USA remain winless in their last 10 World Cup games against European nations (D5 L5), conceding in each of their last 18 matches against such opposition in the competition, since a 1-0 victory against England in 1950.

- Timothy Weah, who scored with the only shot on target in the first half, has netted two goals in his last four appearances for the USA in all competitions, as many as in his first 22 games for his national side.

Both teams are back in action on Friday, with Wales taking on Iran, while the United States face England.